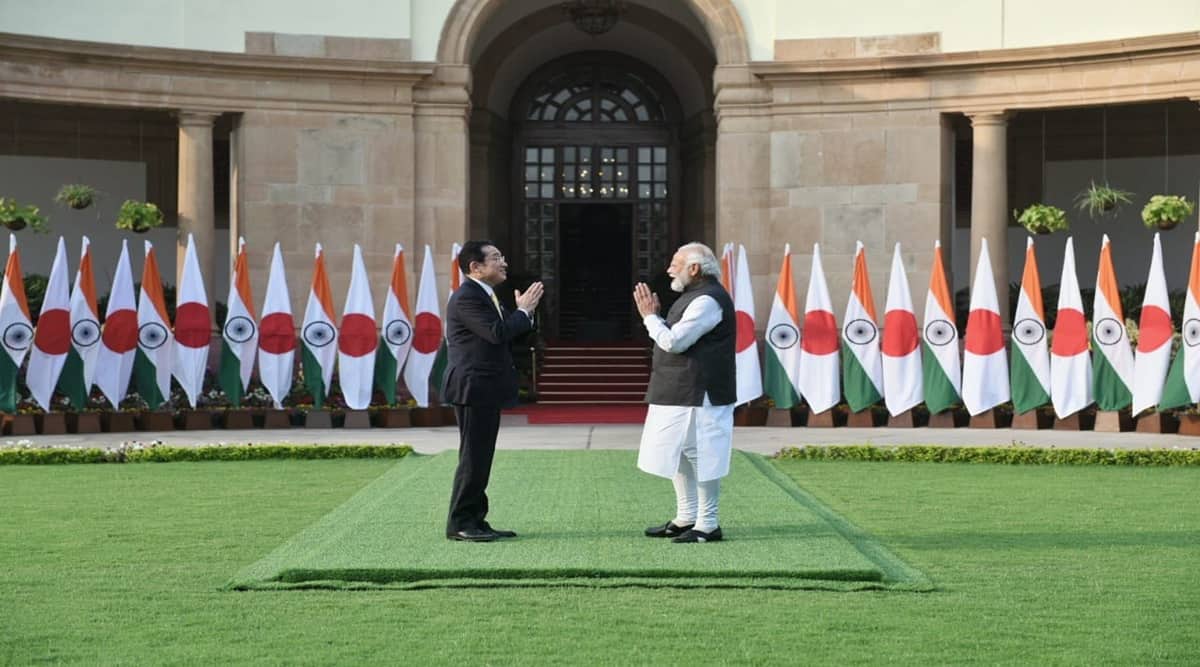 In the presence of Prime Minister Narendra Modi and the visiting leader Prime Minister Fumio Kishida, six agreements were exchanged including: Pacts on Cyber, wastewater management, JICA loans exchanges and a joint statement.

Leaders of India and Japan at the end of day long 14th Annual Summit level meeting resolved to further advance the India-Japan Special Strategic and Global Partnership. At the end of bilateral level talks, the visiting Prime Minister Fumio Kishida announced that his country will raise its investment target in India to 5 million yen which is around USD 42 billion over the next five years.

Today’s meeting comes at a time when the Russian-Ukrainian crisis is deepening and international efforts are on to ensure that the warring nations resolve the issues at the earliest.

In the presence of Prime Minister Narendra Modi and the visiting leader Prime Minister Fumio Kishida, six agreements were exchanged including: Pacts on Cyber, wastewater management, JICA loans exchanges and a joint statement.

The two leaders met at the Hyderabad House in the national capital and talked about ways to boost economic and cultural linkages between the two countries.

What did PM Modi say?

Taking note of the Japanese investments in India, PM Modi told his counterpart that New Delhi is committed to providing all support to the companies from Japan.

And said that the basis of India-Japan in the Indo-Pacific Region and at the global level is prosperity, progress and partnership.

Both countries are determined to expand overall cooperation and India and Japan understand the importance of a trusted, predictable and secure and stable supply of energy, PM Modi said in his statement.

Modi said India and Japan understand the importance of a secure, trusted, predictable and stable energy supply, which each side is determined to expand overall cooperation.

Adding that the two countries are working as ‘One team-One project’ on Mumbai-Ahmedabad high-speed rail corridor.

This is Prime Minister Fumio Kishida maiden visit to India, as the top leader of the country, he has visited earlier in his capacity as a foreign minister. He is meeting Prime Minister Narendra Modi for the second time, they both had met earlier on the sidelines of the Glasgow Climate Change Summit in 2021. After a gap of three and a half years, this visit is the first by a Japanese PM, he came accompanied by a high-level delegation. Today’s visit comes at a time when both countries are celebrating 70 years of diplomatic relations.

In his statement, the Japanese Prime Minister Kishida said that the two countries share common values and both should work towards peace and stability of the Indo-Pacific. And at the joint media conference said “Ukraine situation was discussed. Adding, “Russian attack on Ukraine is a serious development that has shaken the roots of international order.”

“Unilateral efforts to change the status quo by force can’t be allowed in any area,” he told PM Modi. Adding, that both sides have agreed on the need to find a peaceful solution to all conflicts on the basis of international law.

The focus of the talks between the two leaders was on how to achieve free and open and stable Indo-Pacific through the mechanism of QUAD, international and regional issues especially the situation in Ukraine, identifying areas for deeper cooperation.

PM Fumio, became the Japanese PM in October of last year and had visited India earlier in his capacity as foreign minister.

As reported earlier, Japan is among the countries which have announced sanctions against Russia and also has plans to sanction Russia’s state-owned arms exporter Rosoboronexport. Japan is also a QUAD member and along with Australia and the US is hoping that India too takes a stand against Russia.

India has already abstained from the United Nations over the Ukraine crisis and for its own energy security, it has recently imported Russian oil at a discounted price.

At the end, the Japanese leader also announced an investment of 5 Trillion Yen (USD 42 billion) in India over the next five years.

Financial Express Online has reported earlier, that Japan is hosting the second QUAD in-person meeting later this summer, and Prime Minister Modi is expected to be there. No official dates and schedule has been announced by either side.

The QUAD nations (India, Japan, the US and Australia) have been working together to act against the emerging threats posed by the Chinese aggression in the Indo-Pacific, the members have also been focusing on fighting against the COVID-19 pandemic.

Responding to media queries, he said that “India and Japan at the end of talks concluded seven loan agreements — these are in the areas of connectivity, water supply, sewage, official development assistance. The two countries also agreed that plans will be worked out for export of Indian mangoes to Japan and the apples from that country come to India.”

On China: he said the visiting leader was informed about the situation in Ladakh and about multiple transgressions. It cannot be business as usual until we have resolutions. “We should not consider business as usual.”

This is the first major Head/of government/Head of State incoming visit to India in 2022. Japan which has been India’s closest partner in Asia and the world has been involved in some major infrastructure projects especially in the Northeast including a 20 km-long bridge over the Brahmaputra River located between Assam and Meghalaya; Varanasi Convention Centre (Rudraksha) amongst others.

It has also played a major role in India’s first bullet train or Mumbai-Ahmedabad High-Speed Rail.

In the defence area, both countries have inked a Reciprocal Provision of Supplies and Services Agreement (RPSS).

The two countries have a Specified Skilled Workers Agreement, and under Technical Intern Training Programme (TITP), around 220 Indian youth have been sent to work in that country. In 2022, Japan has started an examination for nursing care under this programme.

Over the Top: True grit