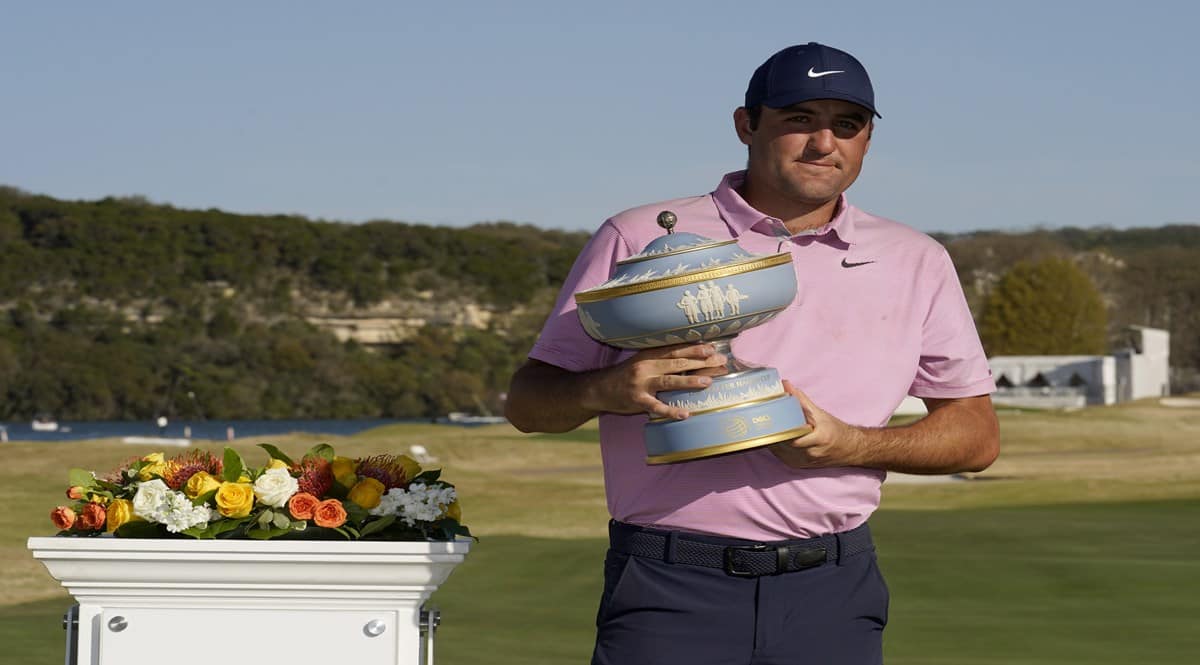 Here are the stats. In the last six weeks Scheffler has made $6.2 million in prize money. That translates into an astonishing $1.2 million for every event he’s teed it up at starting with the WM Phoenix Open. That was followed by a Top-10 finish at the Genesis Invitational a week later. At the Arnold Palmer Invitational in early March, Scheffler lapped the field to win his second tour event in less than a month. And now, after an unremarkable outing at The Player’s Championship, he’s come back to win the coveted WGC Matchplay. This astonishing run was captured by Golf Digest Magazine in a ‘Fastest to world number one,’ (after first win on PGA Tour or DP World Tour) Instagram post. Scheffler needed just 42 days compared to, say, Tiger Woods who needed 252 days, or David Duval who took 532 days. Beat that.

“It’s not something that I didn’t want to achieve or didn’t believe that I could do,” Scheffler remarked on his newly-acquired ranking. It’s just I grew up at Royal Oaks. I grew up wearing long pants to go practice because I wanted to be a professional golfer. That’s what I dreamed of. I dreamed of being out here. … The rankings never really crossed my mind. It was always just about being out here and competing,” he said, appropriately gobsmacked, after the win at the WGC Matchplay.

And compete he did. First against the courses, and finally his peers. At the coveted matchplay event, it was appropriate that the man standing between Scheffler and glory was none other than doughty Kevin Kisner. The man who’s made it a habit of dismantling much fancier opponents every time he goes mano a mano at the World Matchplay was in fine form. In the semi-finals, a trademark performance saw Kisner dismantle Adam Scott at the finish line. Scott who was leading by 3 holes with four to play fell prey to a typical burst of inspiration by Kisner who stole the match from under the Aussie’s nose. In the finals though, all of Kisner’s determination and resourcefulness came a cropper as Scheffler took him down 4 & 3.

Scheffler’s path to the finals was littered with marquee names. In the last-gasp stages of the event, he went up against 2017 champion Dustin Johnson and then, in the semi-finals, was appropriately pitted against the man he’s supplanted at the top of the world rankings—Jon Rahm. Scheffler’s comprehensive win over Kisner doesn’t take away from the latter’s phenomenal run in what is easily the man’s favourite event on tour. Kisner who’s been in the finals three times in the last four years (he won in 2019) has produced some unbelievable upsets over the years. His matches over the years are some of the most watched highlight reels online, and there’s no question that he’ll be back in the mix next time around.. Kisner loves this venue, and perhaps most of all, he loves being the underdog. And that’s why the galleries absolutely adore him.

Away from the PGA Tour, Thai golfers were making waves. On the LPGA, 19-year-old Atthaya Thitikul entered the final round at the JTBC Classic trailing by six. Then she fired the best round of the week, an eight-under 64, to post the clubhouse lead. When Nanna Koerstz Madsen three-putted the last hole, the two went into a playoff, and Thitikul took the title. Talk about rookie confidence.

Meanwhile in Asia, it was a 25-year-old Thai golfer who took the game away from the talented Ajeetesh Sandhu at the inaugural DGC Open on the Asian Tour. Sandhu—whose swing is so obviously modelled after Adam Scott’s action—had an unfortunate stumble on the final stretch after leading by two strokes with just two holes to go on the final day. Both players birdied the 72 hole to go into a playoff in which Thippong made birdie to snuff out Sandhu’s chances and pocket the $90,000 winner’s cheque. “I can’t describe my feeling right now. To win on the Asian Tour I have been waiting for this for a long time,” said Nitithorn, a professional since 2015 whose biggest win to date had been the 2018 PGM Penang Championship on the Asian Development Tour in 2018.

The Indian, though composed in defeat, must be sorely disappointed, to say the least. But Sandhu can take solace from the fact that he got as close as he did. Once you start knocking on the door, it’s only a matter of time before you break it down. Might take days, or weeks…might even take 70 events before you win one and the floodgates open. Just ask Scottie Scheffler.

A golfer, Meraj Shah also writes about the game

Long story in short: The short-form video market has taken off in India during the pandemic