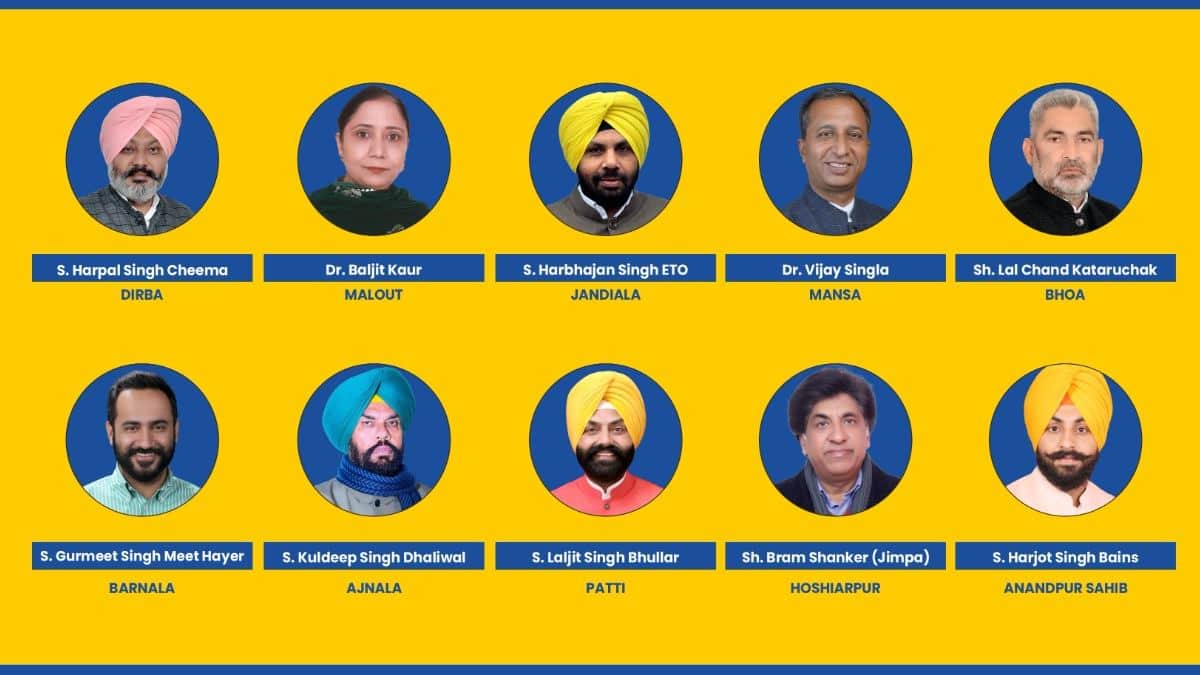 Punjab Cabinet Ministers List 2022: Punjab Chief Minister Bhagwant Mann today revealed the name of his cabinet ministers who will be inducted into his government tomorrow. Of the ten ministers, there is one woman minister. The first time MLAs have found prominence in Mann’s team as eight out of ten are first time legislators. The swearing-in ceremony of the Mann’s cabinet will be held at Punjab Raj Bhawan at 11 am, officials said. Bhagwant Mann put out a picture along with the names of the 10 ministers in a tweet who will be sworn-in as ministers.

“The new cabinet of Punjab will take oath tomorrow. Many many congratulations to all the ministers who will be in the AAP government of Punjab. The people of Punjab have given a lot of responsibility to all of us, we have to serve the people by working hard day and night, to give an honest government to Punjab. We have to make Rangla Punjab,” said Bhagwant Mann.

The list includes Harpal Singh Cheema, former leader of the opposition and second-time legislator from Dirba. He is also the party’s Dalit face. Two-time Barnala MLA Gurmeet Singh Meet Hayer will also find a berth in the Mann-led cabinet. Other MLAs to be inducted in the cabinet are Dr Baljit Kaur, Harbhajan Singh from Jandiala, Dr Vijay Singla from Mansa, Lal Chand from Bhoa, Kuldeep Singh Dhaliwal from Ajnala, Laljit Singh Bhullar from Patti, Brahm Shanker from Hoshiarpur and Harjot Bains from Anandpur Sahib.

There are 18 berths in the cabinet, including the chief minister. After their oath-taking, the newly inducted ministers will assume charge in the Punjab Civil Secretariat and the first cabinet meeting of the AAP government will be held in the afternoon, sources said. Punjab Governor Banwarilal Purohit had administered the oath of office and secrecy to Bhagwant Mann in a ceremony at Khatkar Kalan on Wednesday, the ancestral village of freedom fighter Bhagat Singh. The AAP won a massive 92 seats in the 117-member Punjab assembly, decimating the Congress and the Shiromani Akali Dal-Bahujan Samaj Party combine.

Shabana Azmi on colour blind casting: ‘Actors don’t want to be curtailed by their ethnicity