Veteran actor Amitabh Bachchan revealed on his blog  that the Sunday fan gatherings at his residence, Jalsa, have become less enthusiastic, and the number of people assembling outside his home has also decreased. He also explained the importance these gathering, often termed ‘darshan’ by his legion of fans have for him. He said he always takes off his shoes before meeting his fans, describing it as a “devotion” for him to interact with his well-wishers.

He wrote, “I do observe though that the numbers are in lesser magnitude and the enthusiasm has lessened and the screams of joy now transferred to the mobile camera ..   and that is more evident now an indication that time has moved on and nothing lasts forever.”

The 80-year-old actor has been greeting and waving at the fans waiting outside his house on a regular basis for a long time. Due to Covid-19 restrictions, the actor had to discontinue the meets, but he started them again a few months ago. He had said, “The Sunday meets at the Jalsa gate on the Sunday to be revived, albeit with given precautions.” 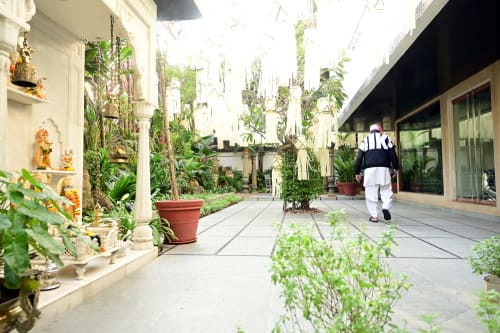 In the pictures shared by Big B, he also gave a glimpse of his house Jalsa and the Diwali decor. The porch of his house was decked up by ‘kandils’ and garlanded idols. The actor then concluded his blog by saying, “and back ..ready for work tomorrow.”

The Goodbye actor also wrote about the ‘chatt pooja’ and shared pictures of the rituals. He said, “Chatt pooja the prayers to the Sun god .. for benevolence and well being and care .. the essentials around the people of mainly Bihar and UP collect by the waters of the sea ..such a magnitude of devotees .. devotion everywhere has ever been in the multitudes.”

On the work front, Amitabh was last seen in the film Goodbye. His film Uunchai, directed by Sooraj Barjatya, releases on November 11.