Bhojpuri singer Shilpi Raj made her fans go berserk after she made a cryptic post on Facebook and wrote how she was disappointed with life. The singer later deleted the post. Here’s what happened.

Shilpi Raj viral Facebook post: Bhojpuri singer Shilpi Raj startled everyone on social media when she took to Facebook to write something that looked like a suicide note to netizens. The singer, who rose to fame with her viral singing videos on social media, called herself a failure in life and mentioned her late mother. She wrote that she could not perform her duties and was confused about how to lead her life further.

In a Facebook post written in Hindi, Shilpi said, “I could not do well (1) neither studies (2) nor music… what I was and what I have become, to tell the truth, today I have definitely become a puppet, who does not understand what to do (mother) ) Only you were the one who warned me, But, now I don’t feel like living in this world, please forgive! (sic)” 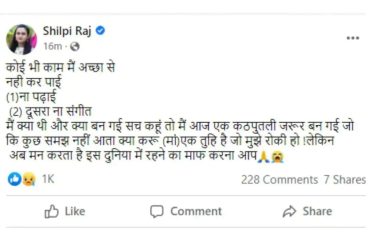 Her post triggered tension online and many fans tried to reach out to her after sensing disappointment in her language. Netizens wondered if that was her suicide note and if she was planning to take her life. However, after the outrage, Shilpi deleted the post, and later in an interview, she clarified that she was doing well.

The Bhojpuri singer went live on Facebook to interact with her fans and diffuse the entire tension. Shilpi though said that she was upset and could not deal with the pressure in life and therefore, sounded disappointed in the post. The singer added that she was feeling sick for a few days. She assured her fans that she would soon come out with a new song to entertain them. Shilpi has sung many hit Bhojpuri songs including the ones with top stars like Pawan Singh, Pramod Premi Yadav, and Khesari Lal Yadav among others.