BTS’ RM (Kim Nam-joon) will turn 28 on Monday, and ARMY is already busy celebrating his birthday. Fans have been sharing clips and edits of the leader and rapper from the K-Pop sensation, dissecting the various sides to his personality, be it his affable crab-loving self, or the intimidating leader who steers the group from trouble, or the fiery rapper on stage.

Being the leader of one of the biggest bands in the world is no easy task, but RM determinedly fulfills his task, while guiding the six through leading questions in interviews, giving them encouragement when they’re low and demotivated, to pushing them to accept awards and give speeches (especially Jungkook) or keeping an eye on the younger ones when they get a little too playful on stage, addressing controversial questions in press conferences in a rather professional manner, thereby earning much respect among ARMY. RM has innumerable iconic moments, one of them being when he subtly warned the band to be careful before answering a question that could land them in trouble.

It’s no wonder then that the rest of his members practically worship him and once when they reiterated their admiration for how he has lead them for almost a decade, he modestly answered, “I lack in a lot of areas, but you guys all have what I lack. That’s why probably I can be a leader.”

Savage, soft and professional; here are some of his iconic moments as a leader:

An interviewer once asked J-Hope, “Which K-Pop band do you think will break next in the US?” While this might have been an innocent question, such queries have landed the band in trouble back on the home front. In the video, as J-Hope is about to answer, RM whispers to him in Korean saying, ‘Be careful.’ Instantly, the mood changes and all the band members joke around and answer, “BTS? I think BTS will.”

Ensuring his members don’t play around too much in public 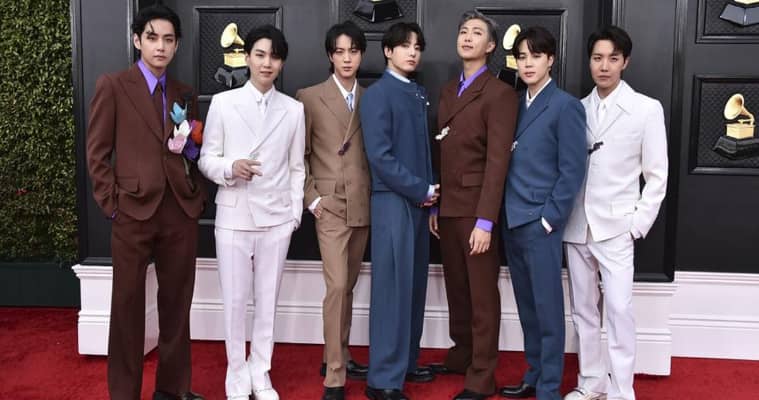 While RM indulges in chaos just as much as the rest of his members, his strict handling of the band at stage events have been carefully documented. For instance, once when J-Hope was giving a speech on stage, Jungkook, V and Jimin were joking around and laughing. Despite RM giving them the glare at first, they still did not stop their antics. Soon, RM walked over to Jungkook and gave him a sharp tap on the back, and the three of them sobered down instantly.

Working with Justin Bieber is not a ‘dream’

RM has fielded several questions in his career, and possibly one of ARMY’s favourite ‘savage RM moments’ was when he answered a question about collaborating with Justin Bieber. The interviewer asked RM, “There’s a rumour that there maybe a Justin Bieber collab. Is that just a dream? Do we manifest this?” RM answered, “It’s not a dream. We’re in the same company, we’re company friends. It’s not a dream, it hasn’t happened yet. So, if you see this video friend, call us. Or come to Korea.”

When he mediated during a heated argument between V and Jin

V and Jin got into a heated battle during the Wings Tour in 2017, which left both sides rather emotional and on the verge of tears just before they had to go on stage. The footage of the fight was caught on their documentary, Burn The Stage. The argument began ten minutes before showtime when RM brought up a timing flaw in choreography. It spiralled as V told Jin that he would have to increase his speed, who responded that he was doing his best.

The fight almost grew bitter and RM had to intervene. Before they went on stage, RM went to give V a hug, and then gave the members an encouraging pep talk saying that they’re a band together when on stage, not just individual members. Later, after the concert, he checked on the members and acknowledged the enormous stress before performing on stage, but also reminded them that the fans should not see their inner turmoil.

When he promised to always have a hug ready for Jungkook

Whenever Jungkook has felt demotivated, RM has been known to cheer him up. Once, RM even left him a message on VLive and said, “Jungkook cried a little while ago, and that’s the only thing on my mind right now. Jungkook, if you’re watching, know that I’ll always believe in you, and I’ll always root for you. I’ll always have a hug ready for you.”

During their June 2022 Festa, an emotional RM broke down, explaining that he wanted to have the band to inspire fans and have a meaning, expressing his fears that the group has lost their direction. The group decided on a break, leading to a collective meltdown as fans began to speculate about their hiatus and panicked about disbandment, owing to mistranslations in the subtitles. RM quickly rushed to douse the fire and cleared the air, saying that BTS wasn’t going anywhere, they would just be reevaluating themselves further, while pursuing their solo careers.