The slew of Korean dramas that raged through February have come to an end— the enormously disappointing Forecasting Love And Weather, the nerve-wracking Twenty Five Twenty One, the bland Thirty Nine and now, the absurdly loveable Business Proposal. The show stars Ahn Hyo-seop, Kim Sejeong, Seol In-ah and Kim Min-kyu.  I was curious to know why the show was such a rage and seemed to be dominating Twitter discourse. Given the tradition of office romances, it seemed like another workplace cutesy drama, where the male lead’s iciness thaws after meeting a woman, who is a breath of fresh air in his dreary life. Well, I wasn’t completely wrong.

Much to my surprise, it caught my attention as suspension of disbelief kicked in. Because without that, you can never enjoy Business Proposal.

Business Proposal is far from being an artful masterpiece. It was an entertaining mish-mash of all the Korean office romances that we’ve seen, and is blessed with practically every single K-drama trope. However, surprisingly, it works. If you watched the show like I did after the emotionally damaging Twenty Five Twenty One, it almost felt like a soothing balm. Sign me up for the unrealistic expectations of a rich chairman booking an entire restaurant for his girlfriend, love confessions on the bridge, and rainy scenes. There’s just something addictive about rich chairmen falling in love, or so K-dramas would have you believe.

At first, the show seemed uncannily reminiscent of What’s Wrong With Secretary Kim, possibly because Ahn Hyo-seop plays frosty chairman Kang Tae-moo, just like Park Seo-joon. He even had a similar hairstyle, which made me think that he was the lovechild of Young-joon and Kim Mi-so (Park Min-young) from the 2018 show. Nevertheless, this time, the reserved Kim Min-kyu, who owes a lot to the chairman and his family, plays his secretary. Much to his chagrin, Kang Tae-moo suffers from desi problems as his grandfather is determined that he should get married, and is keen on seeing him off on blind dates. He arranges the date with Seol In-ah’s Young-seo, who sends her best friend Shin Ha-ri instead. Unknown to Kang Tae-moo, Shin Ha-ri works in his office.

It’s a no-brainer from there on. What you might find hard to believe is that Shin Ha-ri pretends to be a rich heiress with a made-up name, and even puts on a wig as a sort of disguise. It turns out that Kang Tae-moo doesn’t recognise her without the wig. The show wants us to believe that Kang Tae-moo will never ask, “Hey, why did you cut your hair?” But all right, we’ll swallow this scenario, which seems to be heavily inspired by Disney’s Hannah Montana. They enter into a “relationship contract”, which is initially conceived to fool his grandfather into believing that Kang Tae-moo has finally found a woman for himself. But surprise, surprise, love blooms between our two charismatic leads. 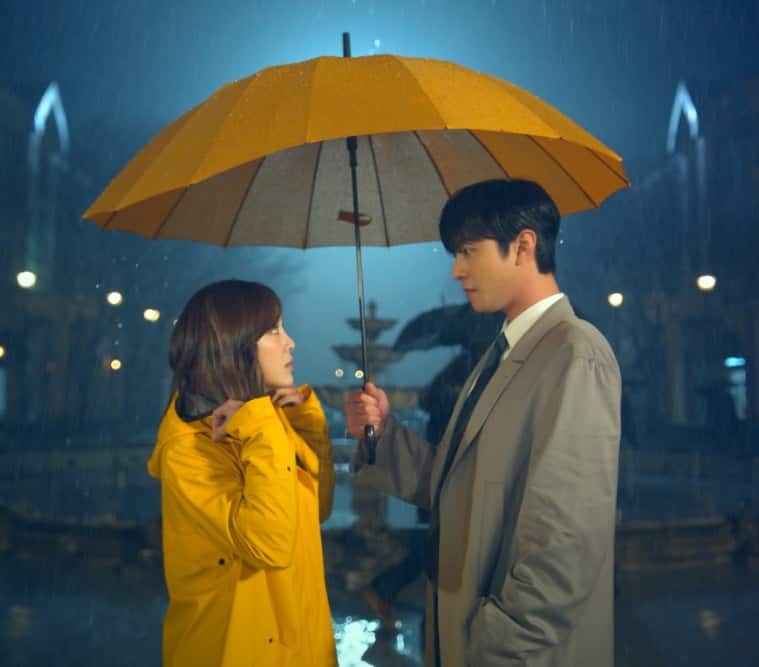 There are several hilarious and embarrassing situations that are so mindlessly entertaining that you can’t help but chuckle at Shin Ha-ri frantically trying to hide the truth from him through many zany schemes. Kim Seojong fits perfectly as the haphazard, confused employee trying to salvage her love life, while Ahn Hyo-seop shows the transition from the cold boss to loving boyfriend in a matter of four episodes.

Nevertheless, Kang Tae-moo questions his intelligence—and hopefully that of the writers—when he uncovers the truth about her. After acting like a petty man-child and needling her at work, he falls in love with her and she reciprocates after much uncertainty. He’s persistent, because that works like a charm apparently, as people would like to have us believe. He says lines like, “I’ll keep asking you out till you say yes.” Stalker alert. Even with Ahn Hyo-seop’s smouldering looks and the steamy kiss that follows, you can’t help but wonder, when will we ever grow beyond these age-old lines that don’t have the shine that people think it does? But then, I sigh, and realise that I’m applying my mind here.

K-drama love is always consuming to watch, especially when there is electric chemistry between the leads. Why bother with much else, then? The second lead couple’s story, Young Seo and Cha-seong is just as gripping and far more passionate. They have a few bumps on the way, of course, because Cha-seong tends to act like a little stooge for Kang Tae-moo, almost endangering his own relationship. Everything can be solved, including deep-seated childhood traumas. Shh, don’t question it, just watch Ahn Hyo-seop and Kim Seojong in the rain.

Watch Business Proposal for twelve hours of cuteness, fluff and hilarity. Sometimes, that’s all you need.