Rapper Dharmesh Parmar, known by his stage name MC Tod Fod, has died at the age of 24. He had lent his voice to the song, India 91, in Ranveer Singh-Siddhant Chaturvedi-starrer Gully Boy. The two actors have mourned his death.

Part of Mumbai-based hip-hop collective Swadesi Movement, MC Tod Fod was among over 50 rappers who contributed to the Zoya Akhtar film. The cause of his death is not known. 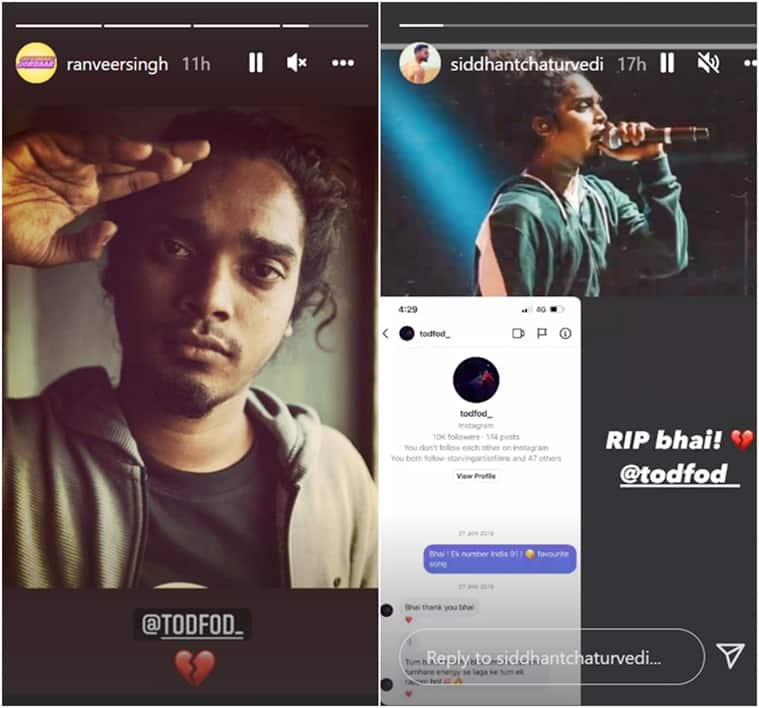 Ranveer shared a photo of the rapper on Instagram with a broken heart emoji. Siddhant, meanwhile, shared a screenshot of his conversation with the late rapper, in which they congratulate each other’s performances. “RIP bhai,” the Gehraiyaan actor wrote.

Swadesi Movement shared a performance by the Gujarati rapper on their official channel and wrote, “It was with this night that @todfod_ performed his last ever gig at Swadesi Mela. You had to be there to experience it, his thrill his love for playing live music. You are never forgotten, you will always live through with your music.” They also added, “Kabhi sochu kahi chale jane ki dur, Koi thikane bas jau jo na ho jyada mashoor, Jaha le jati rahe mann ko bhaye wo me karu, Aise Jeena rehna kiya mene yahi se shuru -TodFod.”

Gully Boy was directed by Zoya Akhtar and was inspired by the lives of street rappers Divine and Naezy. Ranveer played a rapper from slums who finds his feet in the world of music. It also featured Alia Bhatt, Kalki Koechlin, Vijay Varma, Amruta Subhash, and Vijay Raaz in prominent roles.