American singer-songwriter Olivia Rodrigo, who made history at Grammys 2022 by snapping up three trophies in the categories of Best New Artist, Best Pop Solo Performance (for Drivers License) and Best Pop Vocal Album (for her debut album Sour), wanted to be an Olympic gymnast as a child. But with her parents being skeptical about her cartwheels, little did they know that she would skip, leap and land on the podium for the second choice on her career list, that of becoming a musician. And the 18-year-old literally came out of nowhere, proving her credentials over the last two years. In a sense, she embodies the quintessential American underdog story, an LA girl, with stars in her eyes, who climbed the ladder of fame and took everybody along on the ride. And with Time Magazine naming the singer-songwriter the “Entertainer of the Year,” the Grammys were a foregone conclusion. 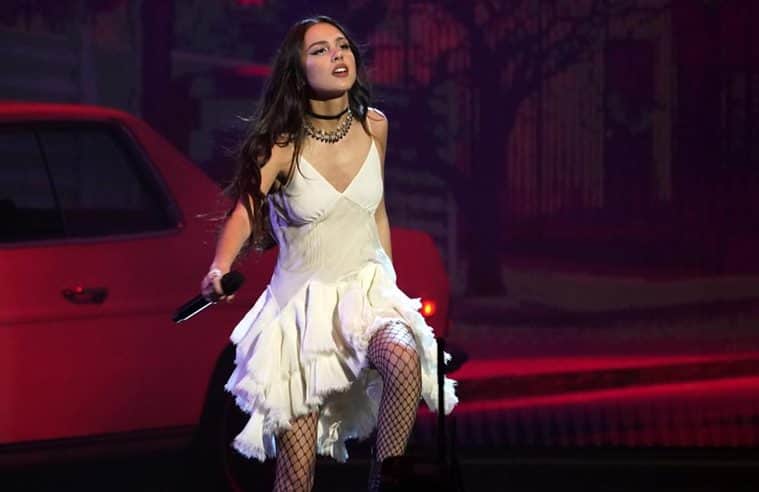 Rodrigo played a guitarist in Disney Channel’s Bizaardvark and was cast in 2019 for the Disney series High School Musical, where she wrote the song “All I Want.” It figured at number 90 in the US charts. With this, she grabbed more eyeballs than even the more successful Disney-created stars like Demi Lovato, Miley Cyrus and Selena Gomez, who couldn’t quite sway the mood of the nation on their debut.

The singer-songwriter didn’t let that early success get to her as she consciously tried to break out of the Disney factory mould and craft her own identity. She would post her cuts on Instagram and quietly nurture a loyal listener base. She would often do some cover versions of Taylor Swift’s songs, one of which, “Cruel Summer,” actually prompted Swift to leave a comment and share on her page. This endorsement did the trick for Rodrigo. Inspired by this, she wrote the song, “Deja Vu”, which trended alongside Swift’s songs from the album “Evermore.”

That’s what led to “Drivers License,” Rodrigo’s proper début single, in 2021, a robust rendition of teen angst, which caught on with young people globally. It smashed all records on Spotify, and went to number one on the Billboard Hot 100 in a week. In fact, Billboard called it the “Runaway Hit of 2021” while New York Times quoted Jeremy Erlich, the co-head of music at Spotify, as describing the song “a ton of X-factor that made this the perfect storm.” The California teen released her debut album, Sour, in the middle of the year and became a household name almost overnight. The album debuted at number one on the Billboard 200 chart and spent five weeks there. This would become the longest-reigning number-one album by a female artiste in 2021.

Even before the Grammy honours, Rodrigo had sealed her place as a chart-topper in many countries.

More than a teenage icon

She capitalised on this with some smart social messaging when in July 2021, she visited the White House to meet President Joe Biden and encouraged America’s youth to get vaccinated before any other pop icon could. Building up on her role as a public service ambassador, Rodrigo became an institute speaker and panelist for the Geena Davis Institute on Gender in Media.

The secret of Rodrigo’s appeal

Rodrigo may have come out of Disney’s candy floss dream factory but she charted her own path with true grit, voicing the angst, conflict and struggle of American teenagers. In that sense, she has emerged as a teen balladeer. Her multi-culturalism — her father is a Filipino-American and her mother has a German and Irish ancestry — helped.

She is an easy wordsmith, delivering her message with gut-wrenching pointedness without the mush. And she keeps her approach simple and direct, without the distraction of too much instrumentation. But she is careful that her restless or desperate breath is picked up by the microphone to establish an intimacy with the listener. This makes the teen defiance that much more acceptable. And it’s this emotional core which might make her songs last much longer than some of the more popular hits in the pop genre. Besides, she tackles the issue of teen break-ups with seriousness, not as a juvenile rite of passage, but as a process of growing up, picking up the pieces and forging ahead.

Third, Rodrigo is honest about her inspirations, admitting that her compositions were rooted in the felt moment. For example, she wrote “Drivers License” after a drive, during which she claims to have been crying and listening to one of her favorite songwriters, 21-year-old Gracie Abrams. This acknowledgment of peerage is rare in an industry that breeds on hostile competition.

Fourth, Rodrigo is a smart packager, who doesn’t really say anything new but has an engaging honesty that resonates with the times.

South Indian stars who are more stylish than their Bollywood counterparts