Actor Sonakshi Sinha issued a statement on Tuesday rebutting reports that a non-bailable warrant has been issued against her in a fraud case. On Monday, it was reported by many publications that the warrant has been issued against the actor in a Rs 37 lakhs fraud case filed by an event organiser against her. The man had alleged that Sonakshi was supposed to be part of an event organised by him, for which he already paid but she did not arrive on the day. He also alleged that her team refused to return the money, after which he filed a case in Moradabad against her.

Sonakshi Sinha called the reports ‘rumours’ and ‘pure fiction’ in her statement. She requested media houses to not carry the ‘fake’ news, as it is being orchestrated by an individual’s agenda to gain publicity.

“There have been rumours of a non-bailable warrant issued against me floating in the media, without any verification from any authorities since a few days now. This is pure fiction and the work of a rogue individual trying to harass me. I request all media houses, journalists and news reporters not to carry this fake news as it is playing into this individual’s agenda to gain publicity,” a part of her statement read. 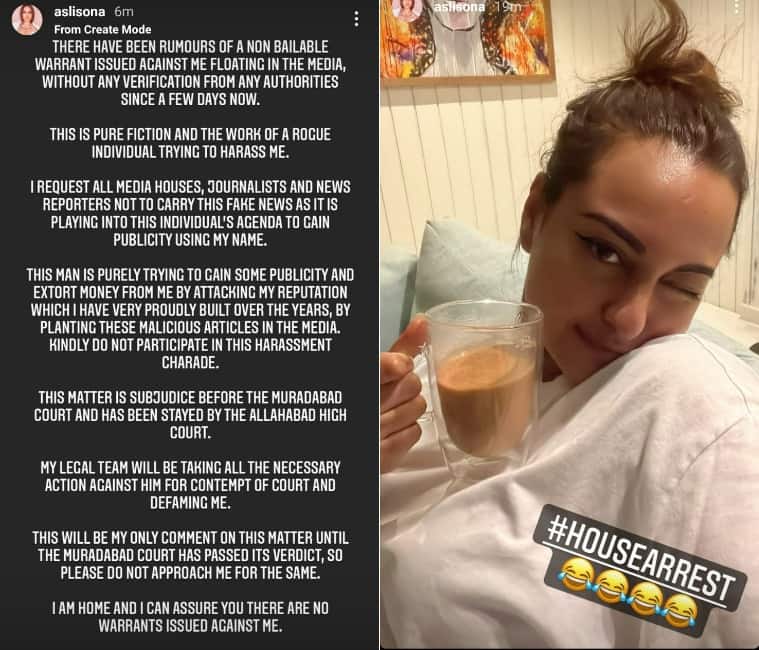 Sonakshi claimed the man was trying to extort money from her and attack her reputation. Stating that the matter is subjudice, the actor said that her legal team is looking into the matter. She also assured that she is home without any warrants and will not comment any further till the court passes a verdict.

“This man is purely trying to gain some publicity and extort money from me by attacking my reputation which I have very proudly built over the years, by planting these malicious articles in the media. Kindly do not participate in this harassment charade. This matter is subjudice before the Muradabad court and has been stayed by the Allahabad High Court. My legal team will be taking all the necessary action against him for contempt of court. This will be my only comment on this matter until the Muradabad Court has passed its verdict, so please do not approach me for the same. I am home and I can assure you there are no warrants issued against me.”

In a cheeky Instagram story, Sonakshi posted a photo of herself relishing a hot cup of tea, and used the hashtag ‘house arrest’ with the photo.

On the work front, Sonakshi Sinha was last seen in Bhuj: Pride of India. She has Kakuda and Double XL in the pipeline.