Prabhas might have built this fearless and larger-than-life image on-screen but in real life, he’s totally shy and reserved. The actor can’t stop smiling when he’s talking to you and radiates immense positivity. Prabhas lets you talk and frame your questions. He understands that you might feel a little overwhelmed by his presence in the same room as that of you. When you are asking a question, he’s not looking here and there. He is looking right at you, in your eyes, making you realise that he’s trying to make sense of what you are asking him and no matter how generic a question is, he would smile and listen to you carefully. Not many stars have that kind of patience. And that’s probably one of the reasons why his fans call him ‘darling.’Also Read – Prabhas Gives Salaar Release Date Announcement Update, Explains Lineup With Project K-Adipurush – Exclusive

In an exclusive interview with india.com, Prabhas talks about his larger-than-life image and how he gives his more than 100 per cent to sustain what he has achieved with the success of Baahubali. The superstar also talks about his latest release – Radhe Shyam, how it’s different and his next big releases including Project K, Adipurush, Salaar and an untitled comedy film. Read on. Also Read – Sunny Leone: Don’t Want Others to Make The Choices That I Have Made in My Life | Exclusive

Why do you keep saying that Radhe Shyam is a different film?

It’s not a fully commercial film. It is a kind of experiment for me. It’s a love story. We can call it a love-thriller also. There are no fights in the film. There are chase scenes, a lot of drama and of course, it has the grandeur – the ship is there. It’s definitely not the film that I have done before. I can’t say it’s completely opposite because I know what the audience wants from me but it’s different.

What made you say yes to Radhe Shyam?

I wanted to do something different which is not only action. I liked the story of Radhe Shyam because I never believed in palmistry. Also, I wanted to take that risk of doing something interesting at this point (in my career). I don’t do films for a message. I want to entertain my audience in different ways. When the emotions are right, there’s always some kind of message that is sent across to the audience. It’s very hard to accept a script and make it right for the audience.

You have a larger-than-life avatar on-screen…

(interrupts) This film is going to break my larger-than-life avatar.

But won’t that upset your fans?

No, if the story is good… I already tried doing that in Telugu. I was an action hero from my first film. Then I did Darling, a love story and No 1 Mr Perfect – and both films did very well. And when I was doing Darling, Dil Raju, who’s a very good friend, said ‘you are doing a family drama, a love story – that’s very tough…’ Until we watch, we try and we give that to the audience, they won’t know what we can do. The master is the script. The actors or the stars can only push the film to the openings or do a better Box Office but the story and the director can help a film become a hit. 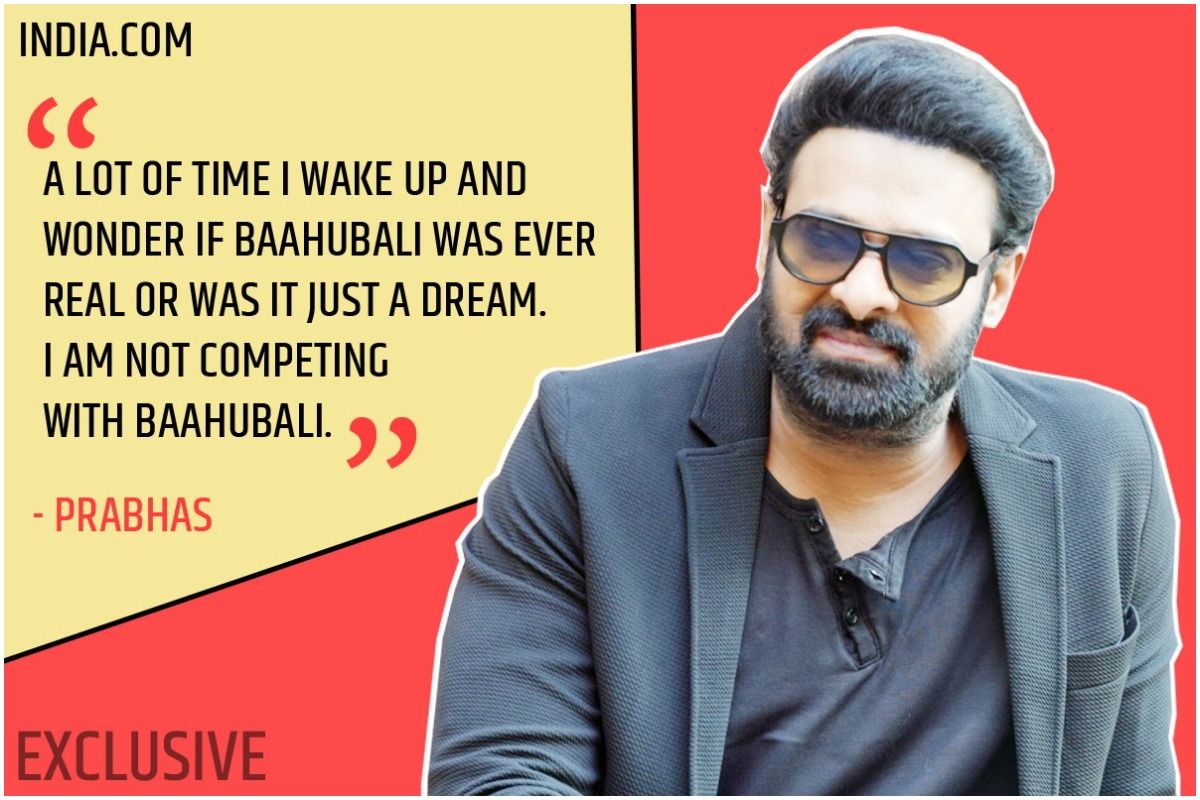 Prabhas speaks to india.com about how his life has changed after Baahubali (Photo Created by Gaurav Gautam for india.com)

Do you agree with people when they tell you that Baahubali is the first film that kind of broke the barrier between the North and the South and established a pan-India film industry?

It’s been 100 years since all of us are working in the film industry. It was time for these industries to open up and luckily for us, it was Baahubali that did so. As Indians, we need to open up and need to watch all the films. We go to Delhi, Kolkata, Hyderabad, Mumbai and we enjoy the crowd, the films, the food there. We work together. Then why should only the film space be restricted? We should be known as Indian cinema. We have a beautiful, extraordinary population which is an advantage for us. We need to fight bigger battles… it can’t be one film industry vs another. It can’t be regional or north vs south vs east vs west – it’s time we make ourselves a big one industry. The process has already begun and it’s going to get bigger from here. It was Baahubali or it could be any other film in any part of the country.

You have to give us an update on Salaar and tell us what your lineup is like for the entire year.

Adipurush is the first film. In April, KGF 2 is releasing. So, immediately after that, we would start shooting Project K. And Salaar would be shot simultaneously. In probably the next two or three months, we’ll announce the release date of Salaar. 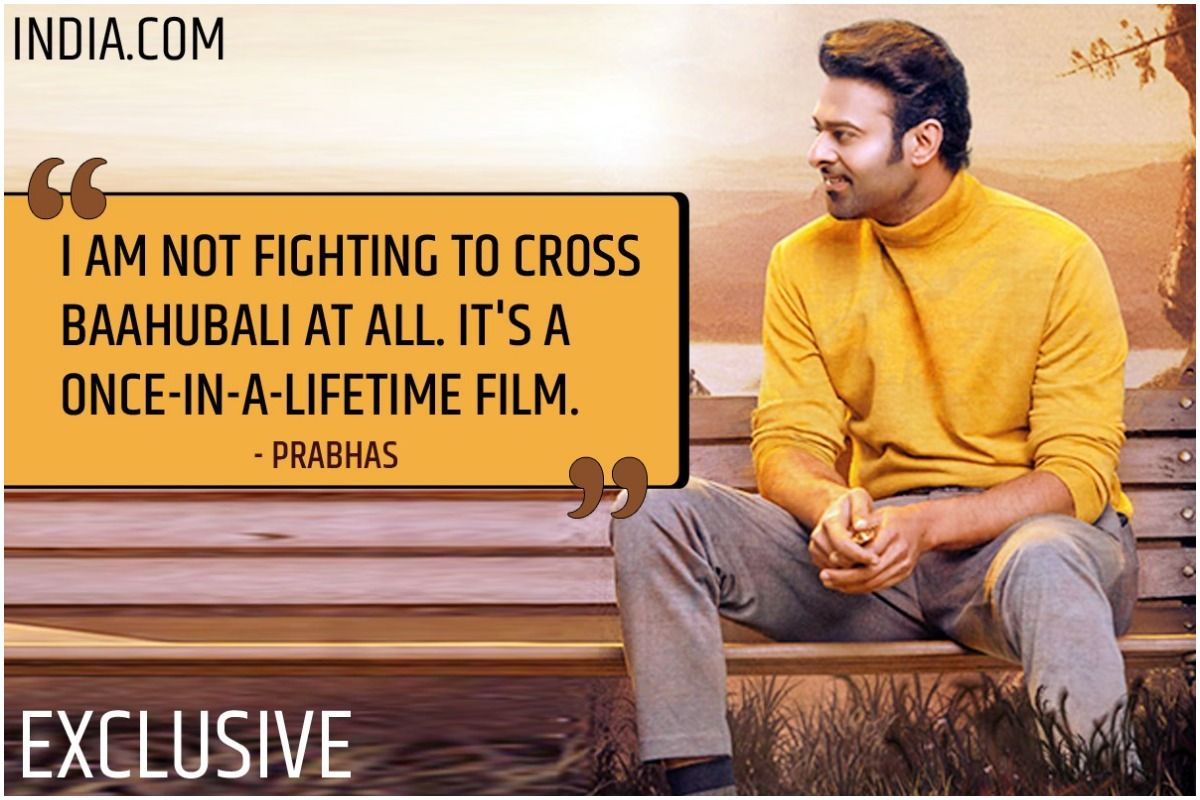 You are playing a palmist in Radhe Shyam. Do you believe in astrology or in the science of the stars?

I don’t like the idea of someone else telling me my future. I like to believe that we should write our own future or at least fight for our destiny. I understand this and I know these things – astrology or palmistry exist but I never follow that. Zodiac is time pass and I don’t do any readings like this. There’s nothing wrong with this though. A lot of my family members believe in these things.

You are known as this big Pan-India hero, especially after Baahubali. What does this term mean to you and does being a Pan-India star matter to you?

I don’t really understand or I can’t really define. I think Baahubali reached every corner of the country. And all the actors in the film were accepted, not only me. Thanks to Rajamouli! So, it’s a name – a term. But, what matters to me is that it’s an Indian film. In nine and a half years, I could do only four films and that is because I am trying to do the best I can. 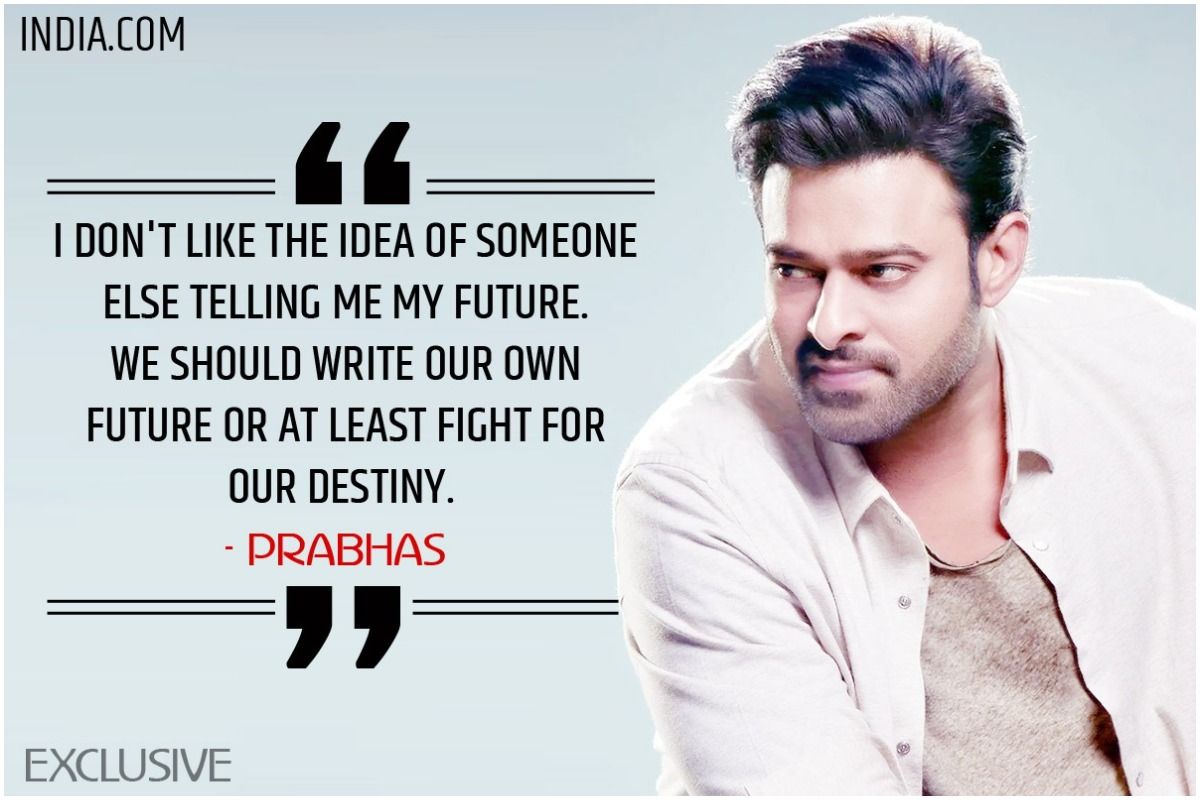 Prabhas speaks to india.com about believing in astrology (Photo Created by Gaurav Gautam)

You have been saying that working in Adipurush wasn’t easy for you. How was it working with Saif Ali Khan or just playing Lord Ram on screen?

Saif sir is a senior and I have worked with seniors in the industry – with Amitabh Bachchan sir and Saif Ali Khan. They are more professional than me. They never go to the caravan except for their lunch breaks. Adipurush was the most frightening experience. You can understand why. With Baahubali, I made a mistake, it’s fine (laughs). I didn’t want to make that mistake here. So it’s not just a film. It’s not even about my character. It’s the idea in totality. It’s pure. We have tried our best with this film. You can’t call it just a film. It’s beyond that.

Do you feel overwhelmed with Baahubali’s Box Office success?

I am very clear that every film can’t be Baahubali. Tomorrow, I am doing a film and expecting it to reach the Baahubali level is not justified. Like you can make many films but you can reach the level of Sholay – the ticket rates and there are so many other factors that keep changing. I am not fighting to cross Baahubali at all. It’s a once-in-a-lifetime film. For me, the biggest challenge is that the audience who have loved me in Baahubali – I don’t want to disappoint them which is the toughest job. The toughest job is to make people in all the regions happy – in Delhi, Gujarat – everywhere… not just happy, I want to entertain them more, want to excite them more.

Your fans want you to go to Hollywood.

I don’t know. Even if I get a chance, I won’t go only because of the sake of doing a Hollywood film. I am very happy and comfortable in India.

But what would excite you about going to Hollywood?

If I like the story… I don’t know, don’t think about it honestly. 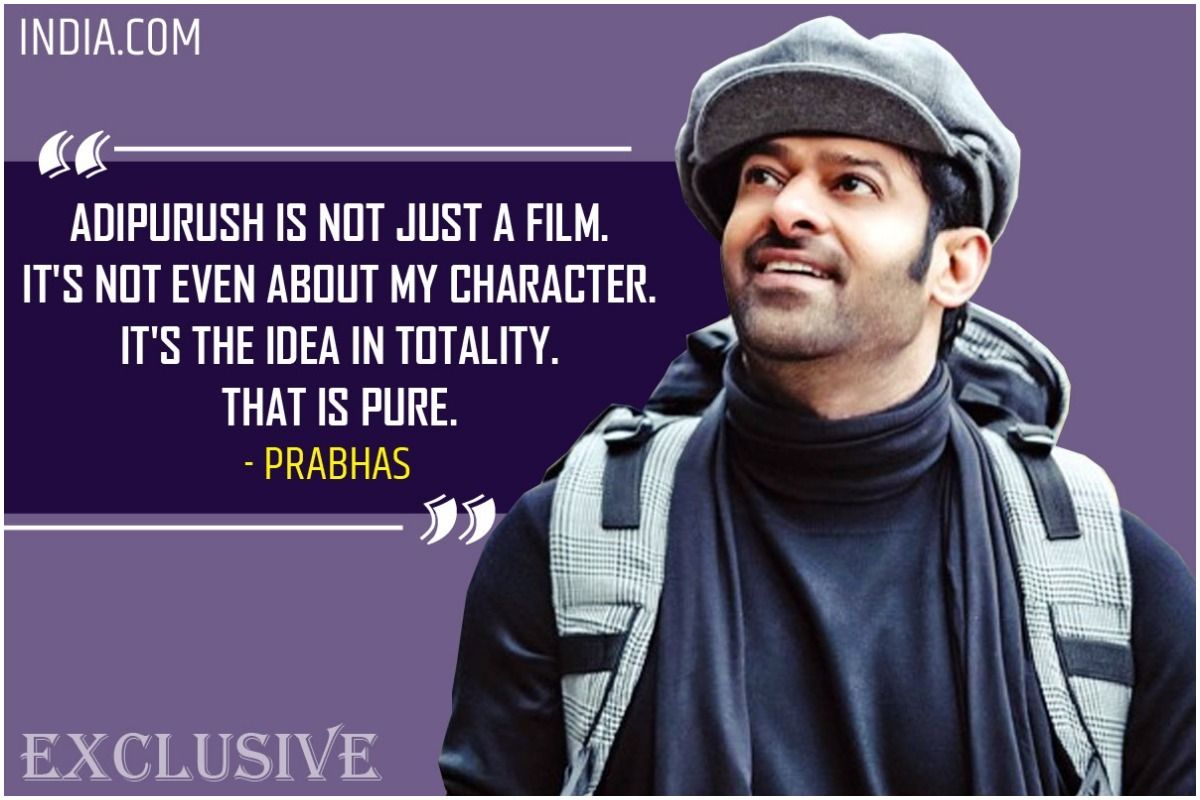 What was your diet like for Radhe Shyam since you look completely lean and younger for this?

I was completely vegan with cheat meals, of course. And my mother was really upset because of this. She cooks good vegetarian food but this whole idea of vegetarianism doesn’t go down well with them. For them, turning vegan was even worst. So, she’s happy when I have non-veg on cheat meals but I had to get that completely lean look for Radhe Shyam. I had to cut down to achieve that look, also because I didn’t have to look like a superhero this time.

Can Prabhas ever become bigger than Baahubali?

I am really happy with Baahubali becoming what it has. All of us – the actors have taken years now to even synch that feeling in (of its success). It has taken me three years to understand this is what we made. In Mumbai, I remember someone had a tattoo on of the first part and we were taken aback and we realised how it was big. Part 2 became even bigger. Maybe now, to an extent, that feeling has settled down but there’s a lot to still synch in yet. A lot of time I wake up and wonder if Baahubali was ever real or was it just a dream. So, Baahubali is very big. I am not competing with Baahubali. I am just trying to sustain or maintain what I got from Baahubali.

Will you direct a film at any point in your career?

It took me a lot of time to understand Baahubali and now, I am super excited about my projects. And my fans are also super excited about the projects that I have announced. I am doing a comedy film next. I am trying to also work a lot. Last year, I did four films – Salaar, Project K, Adipurush – I finished the film but because of CIG, and big sequences and war scenes, VFX – it’s taking time. So, I am working 300 days for my fans and to reach as wider an audience as I can. I am trying to make more films to reach the Baahubali audience. 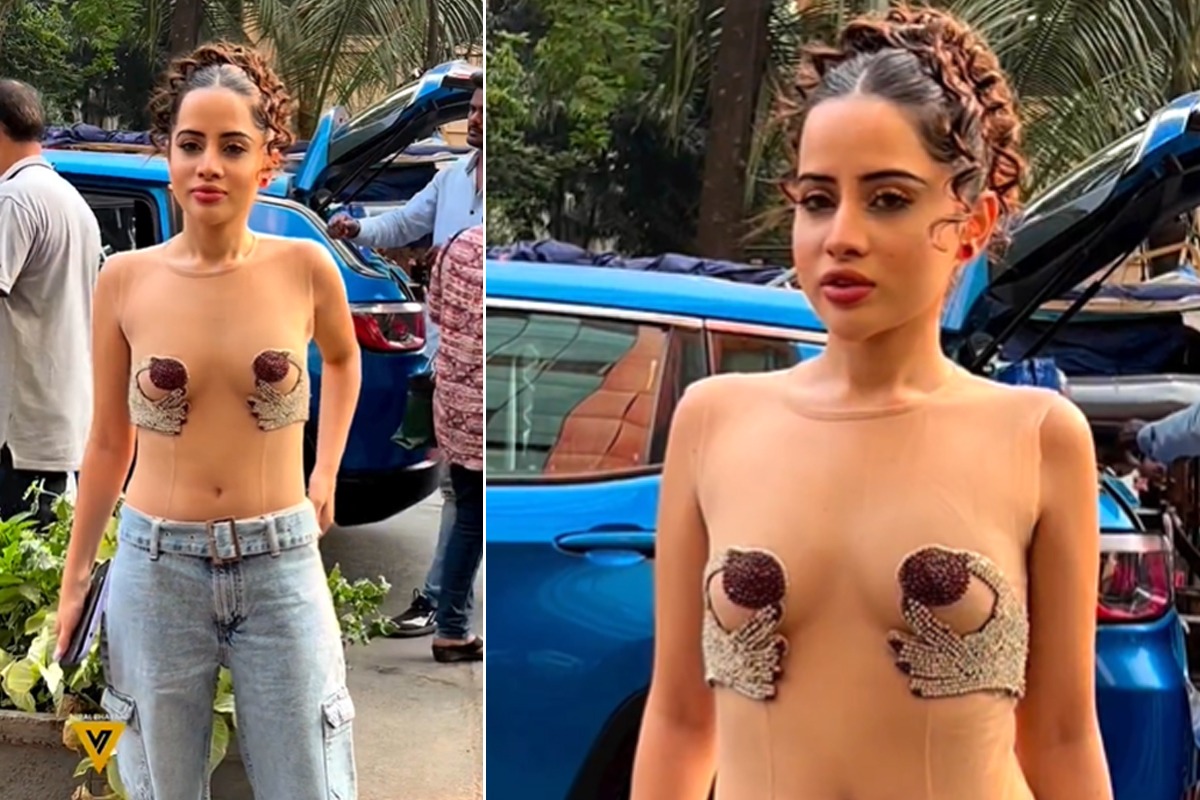