In the latest Pixar movie Turning Red, directed by Domee Shi, the teenaged Chinese-Canadian protagonist called Mei (voiced by newcomer Rosalie Chiang) discovers she can transform into a giant red panda when she is stressed or agitated, and turns back to her real self after calming down (methinks it is to do with her heartbeat).

It is strange and horrifying for her, of course, and for her friends when they learn of it, but this being a Pixar product, you know this transformation is more than just outward change. It is a metaphor and is meant to signify a deeper shift in her life — puberty in this case.

Thanks to her colourful circle of friends (Never Have I Ever’s Maitreyi Ramakrishnan plays Priya, a taciturn Indian girl), and their shared love for a boy band, Mei’s grades are deteriorating and even more than her newfound power-curse, she struggles to deal with her mother. Ming Lee (Sandra Oh) is stern and overprotective, and her affection for her daughter can be smothering. For most of us Indians, she would probably seem, um, uncomfortably realistic.

As it turns out, the transformation is not unique to Mei, and in fact has been present in the female part of her lineage for a long, long time. The script, written by Shi and Julia Cho, weaves in rich mythology. There is a ritual that can help Mei get rid of the ability, but the only suitable time for it (a specific night) is coinciding with a concert for the said boy band. 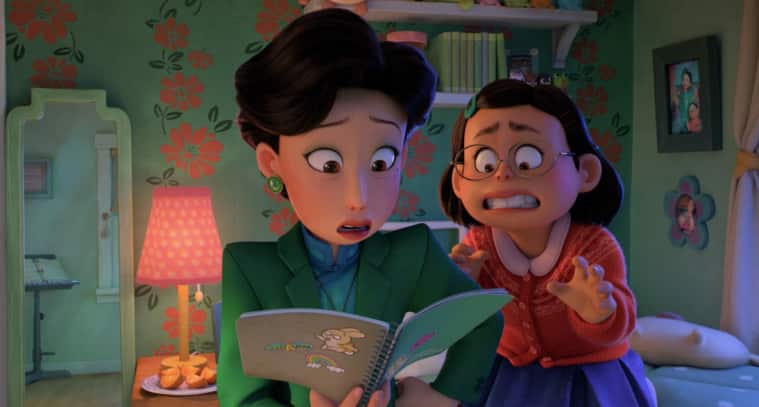 The story reminded me of Pixar’s own Brave, which, despite their vastly different settings, also centred around the relationship between a young girl and her mother and even involved undesirable animal transformation.

Pixar movies come with expectations. Turning Red should fulfil them for you — it certainly worked for me. Another winner from the premiere animation studio, it has all the essential elements we have come to expect. It is vibrant, funny, the story and characters have depth, and the slim runtime ensures it does not overstay its welcome.

It is far from the best Pixar movie, mind you, and also suffers from a little, for want of a better word, familiarity with the studio’s style. Even so, it is good looking, fun, and tells a meaningful story.