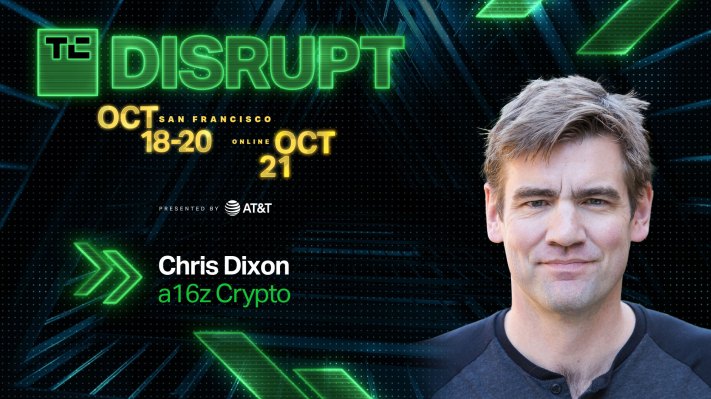 Love it, hate it or barely understand it, crypto continues to draw massive amounts of VC money, despite recent token turbulence casting a shadow over the still-nascent sector. Case in point, in May the venerable Andreessen Horowitz (a16z) closed a crypto megafund for a whopping $4.5 billion.

A16z’s new fund comes hot on the heels of last year’s $2.2 billion Crypto Fund III. That’s a pile of newfangled faith from an investment firm founded back in 2009. All of this activity is why we’re thrilled to announce that Chris Dixon, the founder and managing partner at a16z Crypto, will join us onstage at TechCrunch Disrupt on October 18–20 in San Francisco.

At a time when crypto ecosystems, like Terra and its UST stablecoin, collapse and take billions of dollars down with them, plenty of investors and entrepreneurs remain skeptical. Yet others — like a16z — are doubling down on crypto, NFTs and other uncharted web3 products.

You can bet we’ll ask Dixon about the current crypto market and why he remains bullish. We’re also curious to hear his take on Bill Gates’ opinion that NFTs represent an asset class based on the greater fool theory. We think this promises to be a rich and spicy conversation.

Chris Dixon is a general partner and has been at Andreessen Horowitz since 2012. He founded and leads a16z Crypto, which invests in web3 technologies through its dedicated funds.

TechCrunch Disrupt takes place on October 18–20 in San Francisco. Buy your pass now and save up to $1,100. Student, government and nonprofit passes are available for just $295. Prices increase September 16.