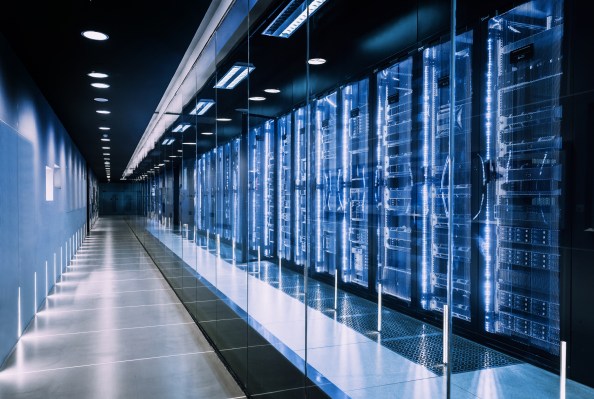 With the big three — Amazon, Microsoft and Google — reporting earnings this week, we learned that the cloud infrastructure market topped $57 billion for the quarter, up $11 billion over the same period last year.

That adds up to 24% growth, according to data from Synergy Research. It might not be the growth we are used to seeing from this market, but at a time of economic instability, it continues to perform remarkably well.

Still, it is a step back from the days when we saw growth steadily in the 30s. It’s even down from last quarter when the market grew 29%. So it’s fair to say that growth is slowing in an area that’s seen explosive expansion over the last several years.

Synergy chief analyst John Dinsdale attributed this slowdown to several factors. First of all, there’s the law of large numbers, which states that as a market size increases, growth decreases. When you combine that with a strong dollar affecting earnings outside the U.S. and a shrinking market in China, it is having an impact.

“It is a strong testament to the benefits of cloud computing that despite two major obstacles to growth, the worldwide market still expanded by 24% from last year. Had exchange rates remained stable and had the Chinese market remained on a more normal path, then the growth rate percentage would have been well into the thirties,” Dinsdale said in a statement.

The other news here is that of the big three, Google Cloud was the only one to gain share, up a tick to 11%, as the work that CEO Thomas Kurian is doing to build the business continues to pay dividends. Meanwhile, Amazon held steady as the market leader at 34%, good for around $19 billion for the quarter, with Microsoft in second at 21% with revenue of almost $12 billion. Google’s 11% came in at around $6 billion.

But that doesn’t tell the whole story as Amazon’s cloud growth slowed to 27.5% in the quarter, down from 33% growth the prior quarter.

As the chart below showing third-quarter data back to 2017 illustrates, the market has grown in leaps and bounds over the five-year period, from just over $10 billion to almost $60 billion. 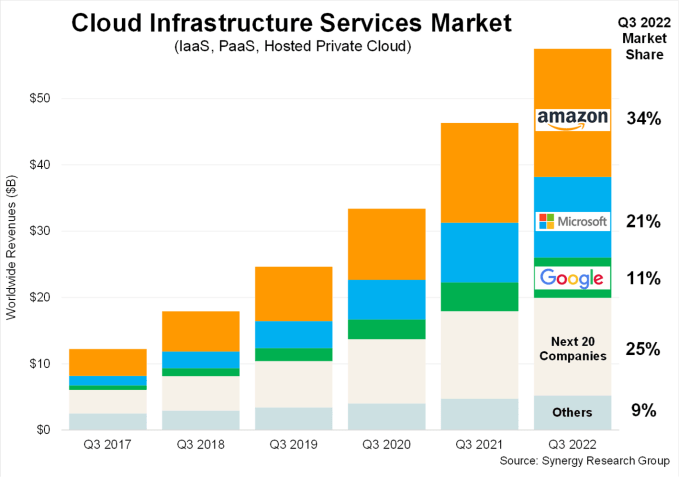 It’s also worth noting that only Google beat analysts’ expectations for cloud revenue, while both AWS and Microsoft came up short of their predictions. The usual caveats apply here around numbers matching publicly reported amounts. Synergy counts public platform, infrastructure and hosted private cloud services in its numbers. Total revenue reported by individual companies may also include other elements, which Synergy doesn’t count.

The fact is that in spite of economic headwinds, the market remains surprisingly strong, and while companies may be looking for places to cut, as we wrote back in June, it’s not that easy to reduce cloud spending because it’s fundamental to most businesses these days. Most companies born in the cloud aren’t going to suddenly build a data center, and those in the midst of shifting to the cloud need to keep moving workloads because of all the benefits the cloud brings around business agility.

Companies looking to cut spending can and should be looking for waste, but regardless, the cloud market will likely continue to produce decent numbers, even if the economics force down overall revenue and slow growth in the short term.

We usually include Canalys data as a means of comparison in these reports, but the data was not available yet at the time we published. As soon as Canalys publishes its data, we will update the article.

Karanvir Bohra voices his support for #MeToo accused Sajid Khan: ‘Everyone should be given a chance’