I am not new to GoPro cameras, but when I recently covered the India Mobile Congress event using the new Hero 11, I found it to be less of an action camera and more of a tool aimed at creative users. In recent years, the narrative surrounding the GoPro camera has largely focused on outdoor enthusiasts and somewhere this impression left me uninterested in the product category. But the launch of the GoPro Hero 11 Black has flipped that narrative, at least for me. I have been using the GoPro Hero 11 Black for about a month and I have to say, the new action camera can coexist with the iPhone 14 which continues to be my primary camera.

Here’s my review of the GoPro Hero 11 Black.

How I tested the GoPro Hero 11 Black

I am no ‘action hero’… but that does not mean GoPros are not designed for people like me. Anyway, I took Hero 11 to the massive India Mobile Congress event earlier this month where I extensively used the action camera to shoot professional-looking content. I had tried to use my iPhone 14 to record videos but holding the phone vertically, shooting content, and communicating with the team on WhatsApp all at the same time didn’t work. That’s when I switched to Hero 11 and covered the entire event using GoPro. I am glad I had the Hero 11 camera with me in my bag. The stabilised video footage looks incredible (more on that later) and is far beyond what you can achieve on a smartphone. Personally, I keep my travel bag limited to a select few devices, but if I am carrying an action camera, it should be versatile enough to be used in daily life. I have used Hero 11 for covering events, vlogging, and for taking images and videos. 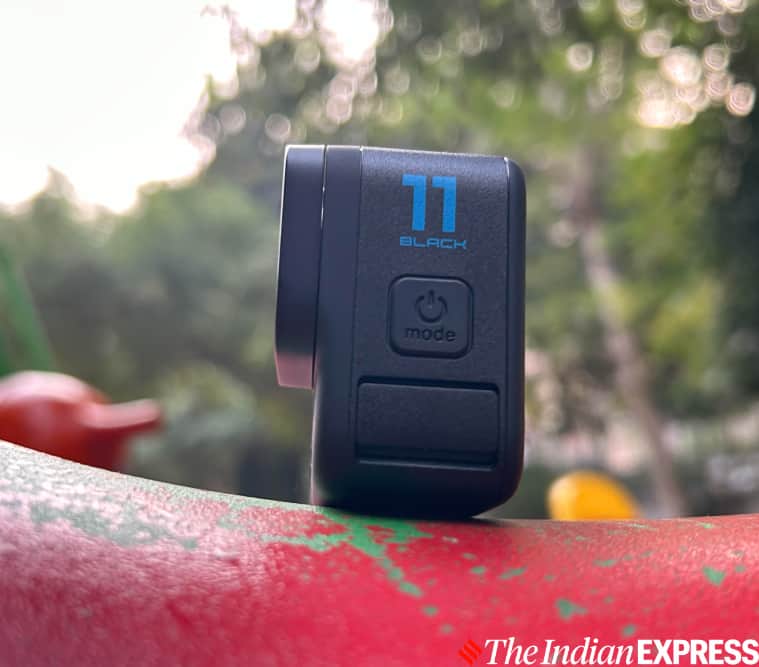 The Hero 11 is small, compact, and super easy to use. (Image credit: Anuj Bhatia/Indian Express)

The GoPro Hero 11 Black looks identical to last year’s model with no change in design or aesthetics. The new model has the same black frame, a power button on the side, a record button on the top and if you slide on the side, there’s a USB-C, microSD and a replaceable battery. On the front is a small 1.14-inch colour screen which can be used for selfies and other POV shooting. The front screen isn’t touch-sensitive, so one has to control it using a combination of buttons and the main rear touch display. Around the back is a 2.27-inch touchscreen, where you control the camera.

The Hero 11 is small, compact, and super easy to use. Once you turn on the camera, you have access to the main functions and features with quick link buttons to the most common settings, such as framerates, field of view, Image stabilisation and video quality settings.

Like the Hero 10, it’s waterproof till depths up to 33 feet. This means you don’t need to buy a separate waterproof case, which is impressive. Since the dimensions of the Hero 11 are exactly the same as its predecessor, it works with most accessories like the Media Mod and Max Lens Mod. I reviewed the Hero 11 Black media kid, which includes not only GoPro’s latest flagship camera but also a 32GB microSD card; the new gumpy mount; the endura battery (more on that later) and other attachments. 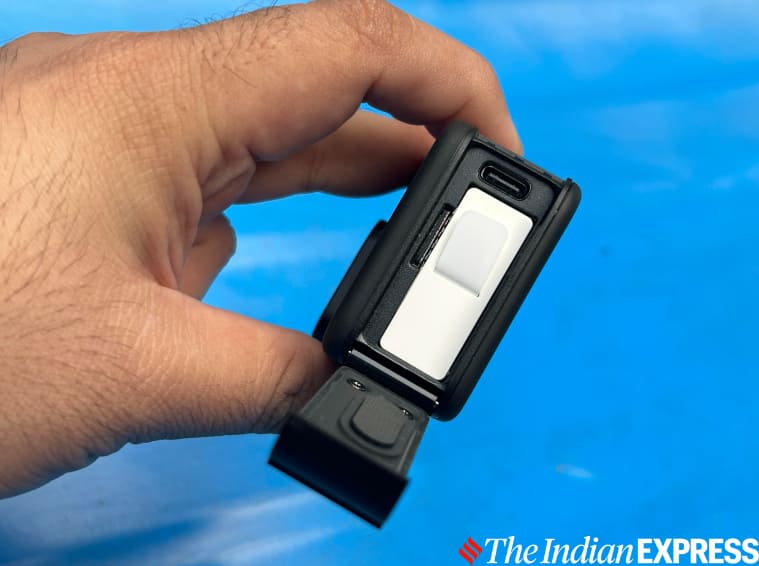 I have used Hero 11 for covering events, vlogging, and for taking images and videos. (Image credit: Anuj Bhatia/Indian Express)

The new Hero 11 uses the GP2 processor which debuted last year with the Hero 10, which not only pushes the performance where needed but also increases the camera’s responsiveness. This year, though, Hero 11 is getting a larger sensor, 10-bit colour and an easier on-screen menu system. The new camera is built around a 27-megapixel sensor, with a 1/1.9-inch size. The bigger 1/1.9-inch sensor is a massive upgrade and captures more light. It also has better colour fidelity, closer to “cinema quality” in 10-bit which allows for about 1.07 billion colours. It can shoot up to 5.3K video at up to 60 frames per second (fps), 4K at up to 120 fps and 2.7k resolution at a ridiculous 240 fps for super-slow-mo footage. 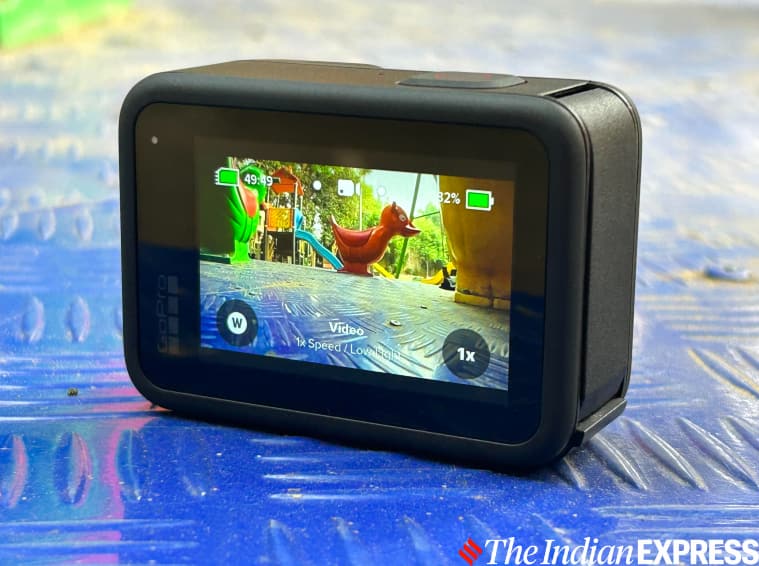 In my testing, the captured video footage was remarkable with the stunning quality only GoPro could deliver. I noticed the noise in low-light situations was very minimal but the GoPro Hero 11 Black shines in different scenarios, including time lapses and well-lit outdoor activities. The sensor can capture video in a square 8:7 aspect ratio, which essentially gives it the largest vertical field of view of any GoPro and enables the new 360-degree horizon lock feature.

The 8.7 aspect ratio is a boon for content creators. This allows for the camera to capture extra-tall 9:16 vertical video for Instagram and high-resolution 16:9 video for YouTube. On the photo side of things, the camera produces a 27-megapixel image with options to shoot in both JPEG and RAW for the best image editing capabilities. I was able to capture good-quality images in well-lit outdoor settings with a wide field-of-view lens, tailored for when shooting vast landscapes and large mountains. Though I must add that the Hero 11 is not a replacement for the iPhone 14 when it comes to capturing photographs.

I also liked the user interface menu which is now divided into two options: Easy and Pro controls, both of which can be toggled on or off in the settings. If you are just a beginner, choose the easy mode. But if you are someone who is a seasoned GoPro user who understands colour settings, explore and ISO, choose the Pro controls. What also worked for me is the accompanying app Quik with its auto highlight feature which takes all the footage, makes selections and edits a video for you. Then there is an auto-editing feature which takes highlighted footage, uploads it to the cloud and edits a video and sends it back to you.

When I reviewed the Hero 10 last year, I didn’t like the battery life. If you record videos at higher frame rates, the battery dries up fast. GoPro has been offering an optional Endura battery that increases the recording time by 40 per cent with a 13 per cent faster recharge time but you need to pay extra for it. This year, though, GoPro has included the Enduro Li-ion batteries in the box. While it is a good move and the camera lasts a bit longer, I am still not 100 per cent convinced. The upgraded Enduro battery lasts longer when shooting quick videos but when you spend significant time with the camera, you still want a spare battery. On top of that, the recharge time for the battery is approximately 3 hours which is on the slower side.

Should you buy GoPro’s Hero 11 Black?

After using the Hero 11 for quite some time, the notion that an advanced action camera like this can be used for everyday activities. If you are a traveller, getting into Vlogging or just want to have fun, you are a possible GoPro user. At the same time, I also see adventure sports enthusiasts and mountaineers opting for GoPros doing all sorts of crazy activities. Its small size and the fact that you can mount the camera everywhere along with its impressive video stabilisation in almost every scenario works in favour of the Hero 11. But I also want to add that the GoPro Hero 11 Black is not replacing your iPhone or professional mirrorless camera. After all, GoPro uses a wide-angle lens, so achieving a shallow depth of field is not possible.

Liam Hemsworth to replace Henry Cavill in The Witcher Season 4

All Quiet on the Western Front movie review: An anti-war antithesis to films like Uri, one of the best movies of the year