Apple may have cultivated a brand image by championing the art of storytelling, but nobody talks about how its products — no matter which device you choose, at any price point — offer a singular experience. The new iPhone SE (2022), although half the price of the iPhone 13, does not give an impression that you are using a low-cost iPhone. This is a fundamentally different attitude from the other brands, whose smartphones are designed ‘on purpose’ to feel different depending on how they are priced. Sure, the iPhone SE may not have the same extra specs as the iPhone 13 or iPhone 13 Pro Max but it has its own character that covers every facet of the unique iPhone experience that too at no extra cost.

Here is my review of the iPhone SE.

The moment I unboxed the third-generation iPhone SE, it invoked memories of the iPhone 8. This is a retro iPhone that brings the nostalgia of the old world of smartphones. The vibe you get from the iPhone SE will strike a chord, especially with older folks who are averse to change and want a smartphone that feels like the phone they currently use. But at the same time, the new iPhone SE will also garner the attention of the younger demographic who is currently obsessed with retro styles. Whenever I hold the iPhone SE in my hand, I get the same feeling as if I am wearing a favourite shirt bought 15 years back. It is something cosy, familiar.

As I said at the beginning, the iPhone SE feels like a rejuvenation of a classic iPhone. The screen is 4.7-inch, the same as the previous-generation iPhone SE, with big bezels on the top and bottom. The front definitely feels ‘older’ compared to the iPhone 13 mini which has a modern design language and has a screen that stretches from edge to edge. However, it isn’t a drawback. This is a phone that is meant to look like your older iPhone. 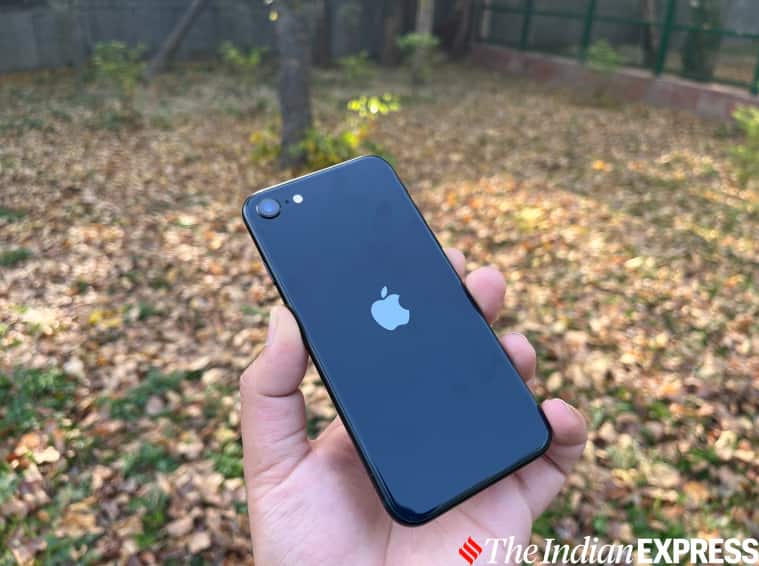 Below the screen, a home button or Touch ID works as a fingerprint scanner for quick access to the iPhone. Even though other iPhones have a ‘notch’ that houses the phone’s Face ID camera, the old-school Touch ID on the iPhone SE is easier to unlock the device without removing the mask for Face unlock.

The most underrated thing about the iPhone SE is its size. I have relatively smaller hands, and using big-screen sized phones makes me uncomfortable. The iPhone SE feels just right. The advantage of a smaller phone is how easier it is to swipe down to access notifications or the Control Center. A phone like this fits perfectly in my jeans pocket and track pants. The iPhone 13 mini also has a small form factor and compact size but it costs a lot more.

The biggest downside of a smaller phone is typing accuracy. A smaller screen translates to a small keyboard. It can take a few days to adjust to, but even after that, you do make typos while sending a text message or writing an email. But thanks to the autocorrect option, these things can be avoided. 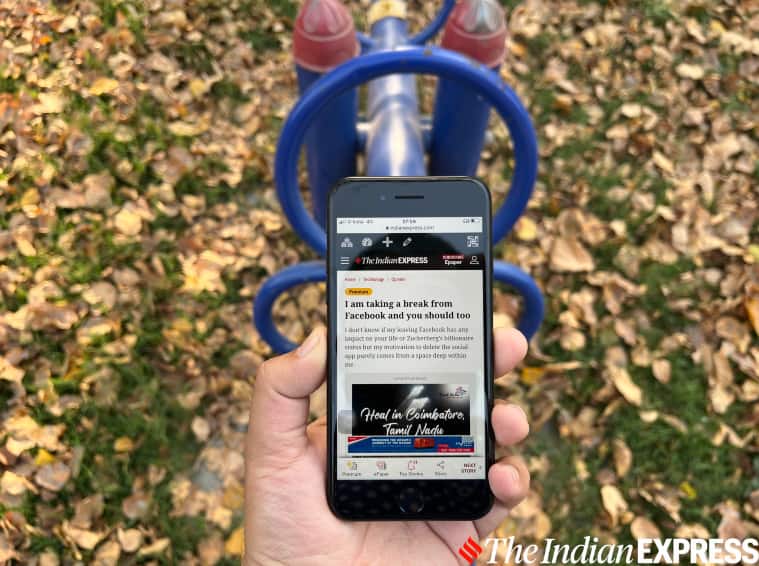 But there is no doubt that the iPhone SE is designed to be a premium smartphone. It uses an aluminum frame and glass on both the back and front. From the back, the Apple logo is centered and the ‘iPhone’ marking is nowhere to be seen. The iPhone also has IP67 water and dust protection rating. So you don’t have to worry if you accidentally splash water on the device. The iPhone SE has a clean look and feels comfortable in hand. It is a bit slippery, though. You are probably going to buy a case for the phone as soon as you start using it. It has Qi wireless charging support but lacks a 3.5mm headphone jack. My review unit comes in black, however, the back is a lot more fingerprint-magnet but I think the white iPhone SE also looks quite nice. It would have been great to see more fun colour options, something which Apple did recently with the M1 iMac. 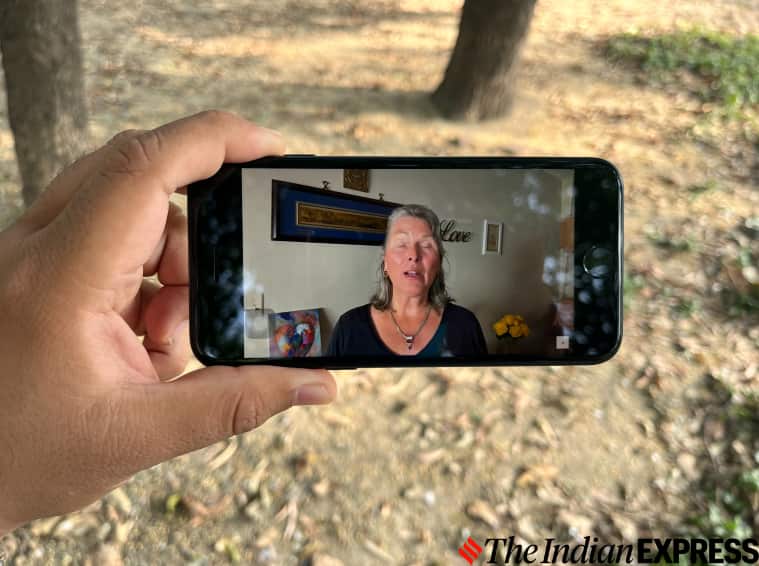 As for the display, the new iPhone SE uses a 4.7-inch retina screen. The display comes with a 750p resolution and uses an LCD panel over an OLED screen that delivers better colours and brightness. For average users, the screen is good enough to read emails, scroll on Facebook, watch YouTube videos or look at Google Maps. I watched Jalsa on the iPhone SE’s screen, and the experience was just fine. Some may find watching videos or playing games a cramped experience on the SE. Because in their head, a larger display translates to a better experience. I guess it’s a matter of preference. Its speakers aren’t spectacular. It’s fine enough for watching videos or attending calls on speakerphone though. 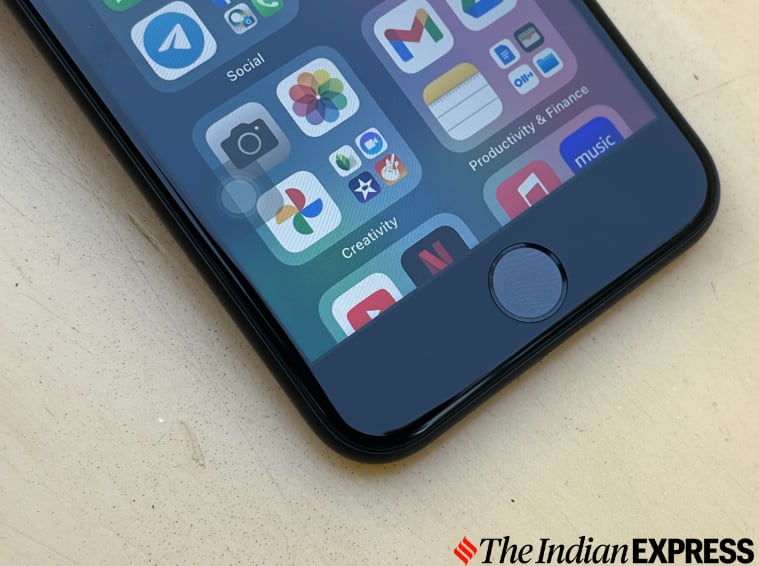 The iPhone SE (2022) has the same A15 Bionic chip as the iPhone 13 lineup, making it one of the fastest smartphones available on the market. The chip inside the iPhone SE is fast, though most average users don’t really care about what RAM or GPU the phone comes with. They just want to know how fast the phone is. Downloading apps is fast. Switching apps is fast. Editing photos and videos is fast. Games run faster on this phone. Apple Music and Linkedin load faster. It feels incredible to play Apple Arcade titles on the iPhone SE. Heavier titles like Call of Duty Mobile were equally impressive, and rarely caused the phone to heat up.

The only thing I wished the iPhone SE had was a larger 128GB storage option for the entry-level model. Sadly the base model still comes with 64GB storage which I think will get filled easily in a matter of days. The phone also supports faster gigabit LTE and 5G, making the device futureproof in years to come. The new iPhone SE runs the latest iOS 15 as the rest of its lineup. Apple will still provide at least five years of software and security updates, and potentially will support the iPhone SE for as long as seven years. 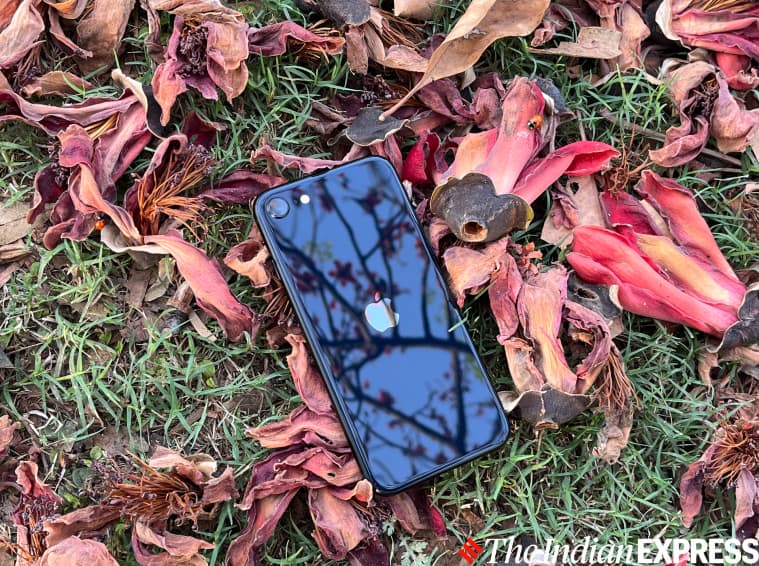 The only thing I wished the iPhone SE had was a larger 128GB storage option for the entry-level model. (Image credit: Anuj Bhatia/Indian Express)

One of the biggest drawbacks of the iPhone SE (2020) is its battery life. The A15 Bionic chip inside the third-generation iPhone SE does translate to better battery life. In everyday use, the iPhone SE’s battery life seems to last a bit longer. With standard use — checking Linkedin, playing a few YouTube videos, browsing and listening to Apple Music — I managed to regularly squeeze a day out of this battery. I won’t say the battery will last over a day and frankly, I was not even expecting this. The iPhone 13 mini, in comparison, last much longer with the same set of things I do on my phone. Mind you, the iPhone SE does not come with a charger inside the box, just like Apple’s flagship iPhone 13. 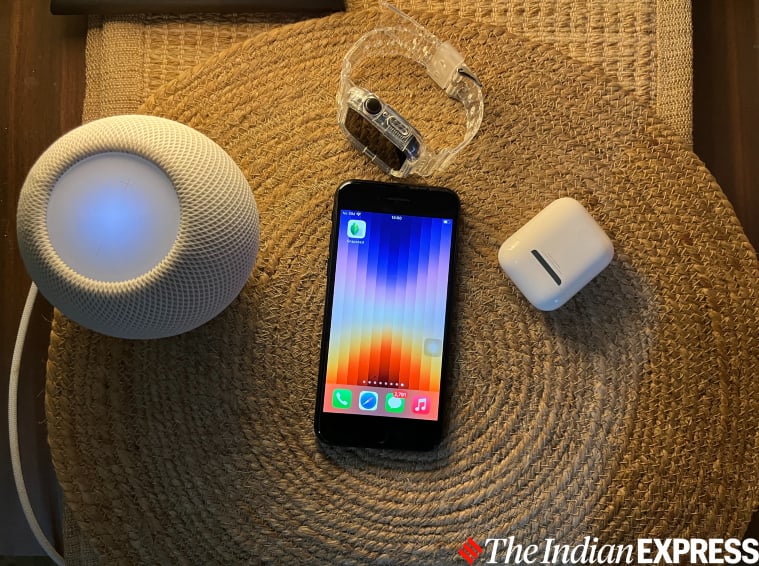 The strength of Apple products is its ecosystem. (Image credit: Anuj Bhatia/Indian Express)

I constantly get the same question from people “How much better is the camera,” whenever I get a new smartphone for review. The thing is the camera is an important factor in choosing a smartphone. The iPhone is consistently ranked among the best camera phones out there in the market – and the iPhone SE despite a single 12-megapixel f/1.8 with optical stabilisation does wonder with everyday photography. In the outdoors, the camera shines. The level of highlights and shadows the SE’s camera captures is amazing. There’s so much detail in every shot I captured in bright sunlight.  The Smart HDR also improves dynamic range in photos, particularly for landscape shots.  But I do feel at some point, Apple needs to add another lens to improve the photography experience. 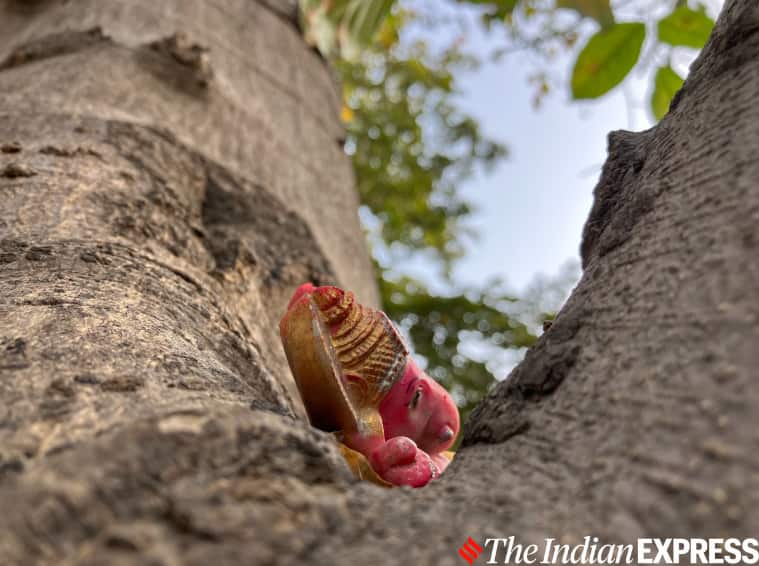 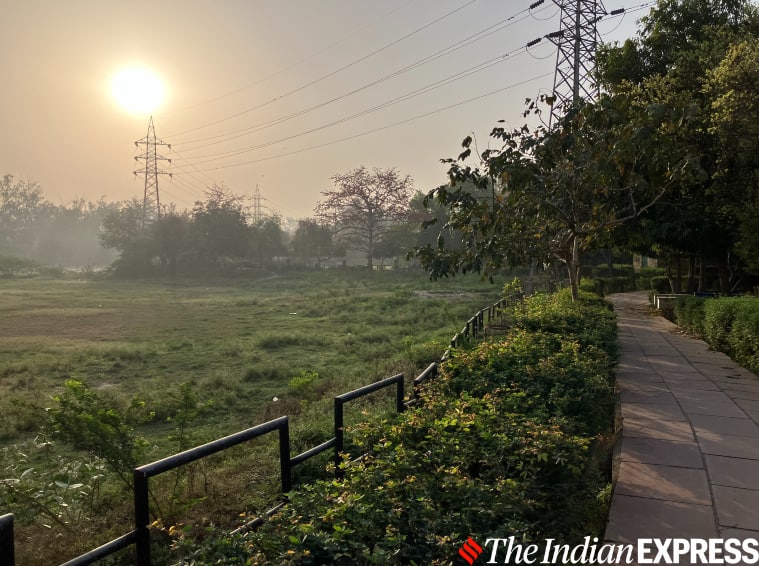 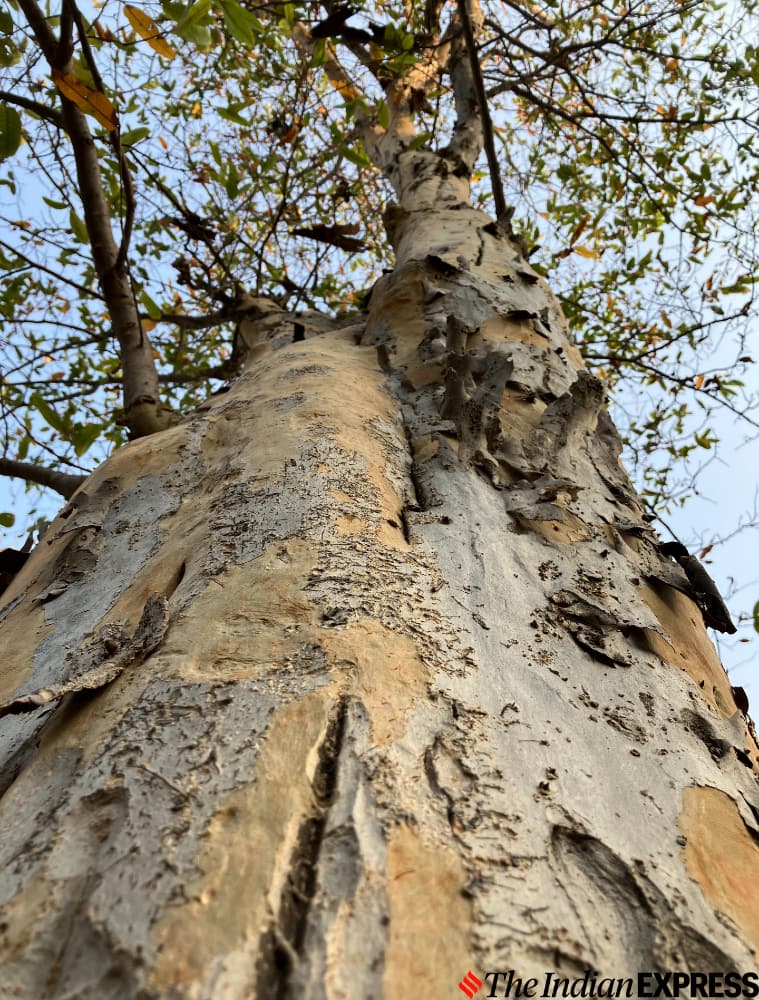 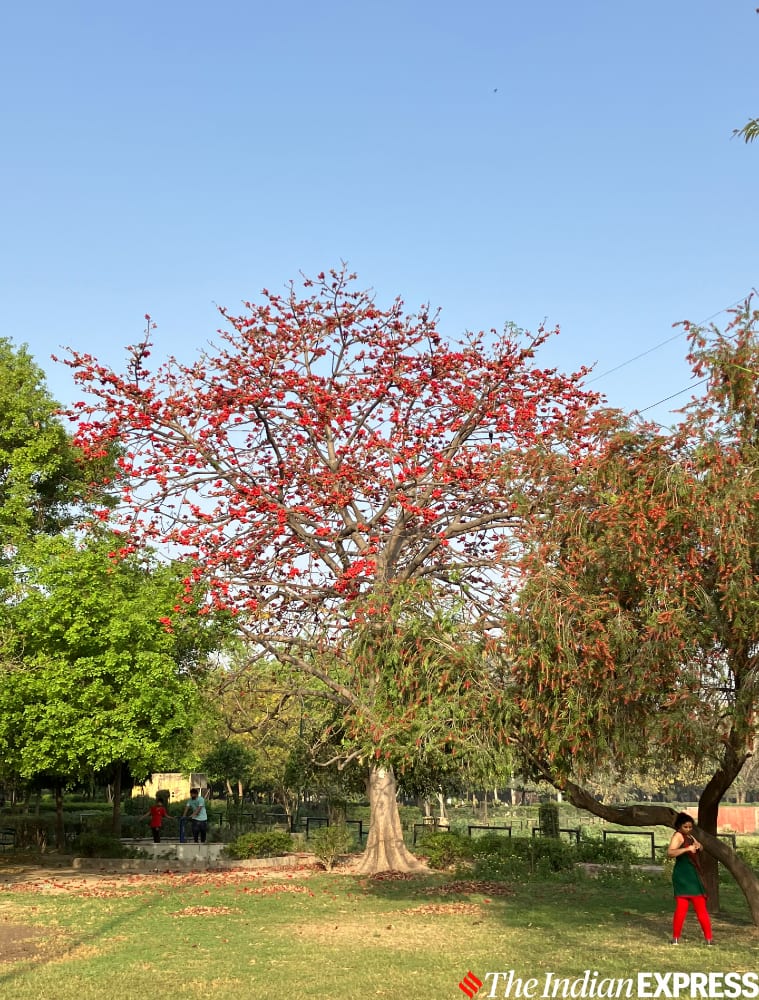 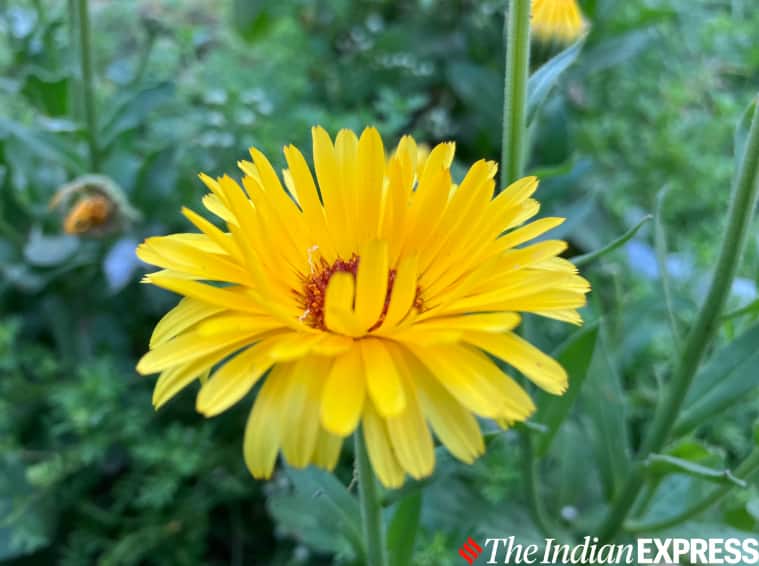 Low light photography is a different story. Since there is no Night Mode on iPhone SE, I ended up taking pictures that were too shaky and lacked depth. The iPhone SE also supports portrait mode but uses software to do so. Pictures look fine but not spectacular but it’s still a nice feature to have on a phone.  A 7-megapixel camera on the front is kind of okay when the lighting condition is appropriate when fumbles in low-light.

One area where the iPhone SE is very much ahead of curve, especially compared to Android-powered flagships, is in the video recording department. The iPhone SE offers video recording at up to 4K / 60p. The recorded clips have high contrast and considerable sharpness. With the new iPhone SE (2022), Apple is capitalising on nostalgia, something Nintendo also likes to do often with its hardware. Starting at Rs 43,900, the beauty of the iPhone SE is that it carries the legacy of the traditional iPhone design but at the same time, packs with up-to-date hardware and intelligent software that increases the shelf life of a smartphone. It’s clear that Apple has a lot of potential to leverage with the new iPhone SE. It isn’t winning awards for the best smartphone of the year – this is typically reserved for its high-end flagships. But a device like the iPhone SE can thrive in the crowded smartphone marketplace with different audiences. Also, this is the most affordable iPhone you can buy. That makes for a great selling point to many users.

Mawi launches a patch to detect how brokenhearted you are – TechCrunch