Mid-Day Squares has had an interesting journey to where it is today, including an idea founded in a kitchen, a declined acquisition from a chocolate giant and a music video rebuttal.

The Canada-based company was founded by Nick Saltarelli, his wife, Lezlie Karls and her brother, Jake Karls in 2018 after coming from different careers in areas like product development and marketing.

The startup was born out of Lezlie Karls’ initial desire to get into plant-based foods when she whipped up the idea for Mid-Day Squares’ first product, Fudge Yah, in her kitchen. It is a double layer of chocolate, chunky on top and soft on the bottom, that includes fiber, protein and Omega-3 to help satisfy the hunger cravings you get after lunch — hence the mid-day part.

“When walking the grocery aisle, we saw that people were looking for more protein and less sugar,” CEO Lezlie Karls told TechCrunch. “We saw a white space for functional chocolate. There are a lot of chocolate bars, but no one is making chocolate that gives benefits like fiber and fills you up.” 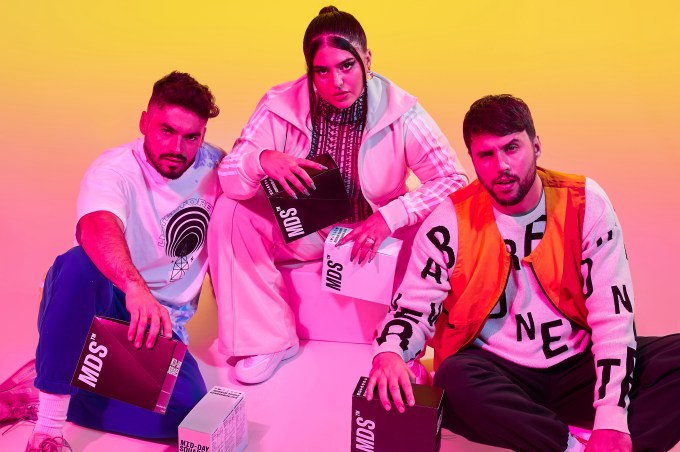 Lezlie Karls and Saltarelli describe themselves as introverted, and wanted to bring in someone who could help create a community. That’s where Jake Karls comes in. At the time, he was running a clothing business on college campuses, hosting parties with hundreds of people and working the social media channels.

One thing that swayed him to join his sister and brother-in-law was that he realized the food and beverage space was operating from an older playbook and not making much noise. That was the opposite of what they saw for Mid-Day Squares.

“I asked them, ‘what if we are the different ones, the ones that tell the story that emotionally connects?’” Jake Karls said. “I showed them a slide of a rock band and told them this was the strategy: We are going to become a rock band, but will sell chocolate, showing the good, bad and ugly of the business using social media. Then people will feel like they are buying from a friend because they know us.”

The method was tested when, in 2021, Hershey’s wanted to purchase the company. After deciding the deal wasn’t for them, the company received a cease-and-desist letter from Hershey’s about using the color orange for its packaging, something that had not been a problem. They responded with a music video entitled, “Chocolate Gone Crazy.”

Today, the company has a mix of 65% in-store retail and 35% online. The bars can be purchased in more than 2,400 stores, including Whole Foods and Sprouts nationwide. It also locked in a partnership with Target that will put Mid-Day Squares within a six-mile radius of most Americans.

Mid-Day Squares is now looking at a fourth flavor, and took in its third fundraise of $10 million to get the ball rolling on that and an expansion into other retailers, convenience stores and internationally into the U.K., Latin America and Asia.

In addition to the fourth flavor, they have plans to launch a fifth in 2023, and have another two in the product pipeline.

Saltarelli considers the new funding a Series C, mainly because the company did not want to take on convertible notes. Mid-Day Squares previously raised $7.5 million, and with the latest investment, has a $35 million pre-money valuation.

The company, on average, sells 13 bars per store per week per flavor and ended 2021 with $8 million revenue. Saltarelli expects to see double that at the end of this year. He has an ambitious goal of reaching $100 million in revenue by 2025, and the company has its own manufacturing plant with the ability to produce the capacity needed to get there.

Saltarelli also hinted that when the investment runs out, Mid-Day Squares will likely be in position to go public in Canada.

“We are building a brand, not just to be a product on the shelf, but to build a deep community,” Lezlie Karls added. “People are tired of buying from conglomerates where they don’t know who is behind it. We are offering a $3.99 square to be part of this journey with us.”