When it comes to annual franchise games, a hiatus marks a significant turning point for the studio. To say “WWE 2K20 met with poor reception” is perhaps putting it lightly. The game was rampant with issues from launch day, ranging from textural glitches, bad optimisation, and a lack of superstars. Plus, it was all running on an outdated game engine, which at times, mirrored the old-gen PS3 graphics.

Patches weren’t a viable solution either, as they caused game-breaking bugs, preventing fans from playing the title as a whole. The collective backlash sent developer Visual Concepts back to the drawing board, where they decided to skip a year and focus on creating a better follow-up. Does the extra time help WWE 2K22 deliver strong punches? Here’s our review.

Since its debut in 2014, the ‘2K Showcase’ has been the saving grace for these games, letting you relive iconic moments from an all-time legend’s career. However, in a surprise manoeuvre last time, WWE ditched the traditional ruling to feature the tale of four new-age female wrestlers. This did not sit well with fans for two main reasons. One, it skips over the entire idea of an icon’s highlight reel by introducing new superstars – there needs to be some nostalgia factor involved. And second, their arcs were poorly written with surface-level details, while the inferior graphics made their faces barely recognisable. 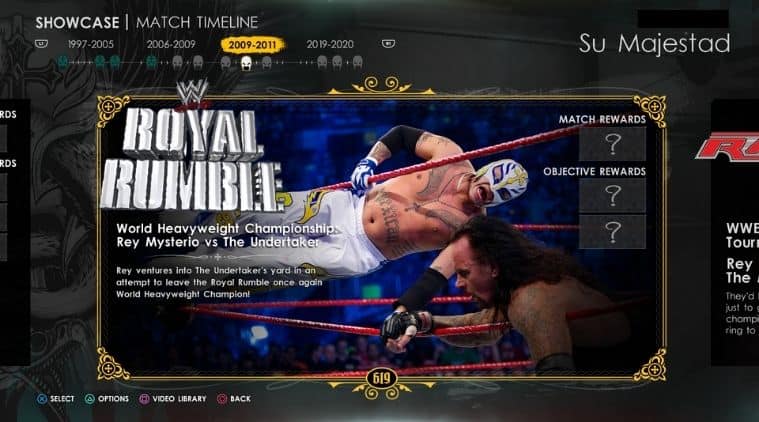 This year’s 2K Showcase takes you on a journey through some monumental fights in Rey Mysterio’s 20-year spanning career. (Screenshot)

Two years later, the franchise is back, bringing in the mask-donning veteran, Rey Mysterio. This, I think is a great move, given WWE fans will easily recognise him from his 20-year long career, where he enthralled us with his Lucha Libre-inspired acrobatic moveset. We start from his 1997 days, facing off against Hall of Famer Eddie Guerrero, on Halloween Night.

The rules are the same as before, where you perform specific moves – as said on-screen, to progress in the story via interactive cutscenes. Throughout those fights, Rey himself, acts as a narrator, offering some insight into the events and basically, hyping you up. But, a lot of it felt fake, owing to the shoddy writing that used adjectives as a cue for him to raise his voice and be enthusiastic.

Also, the fact that he was reading from a teleprompter was quite distracting. Not trying to sound accusatory, but I hope he was somewhat involved in the writing process, as it made the later emotional plotlines difficult to sit through. I’m, of course, referring to Eddie Guerrero’s demise in 2005, which resulted in a spectacle of a match between Mysterio and Shawn Michaels to honour the Mexican wrestler. The narration here was pretty barebones, and didn’t go deep and personal into the bond he shared with the dead superstar. So, instead of sounding like an intimate account, it feels more like a biography written in first-person. 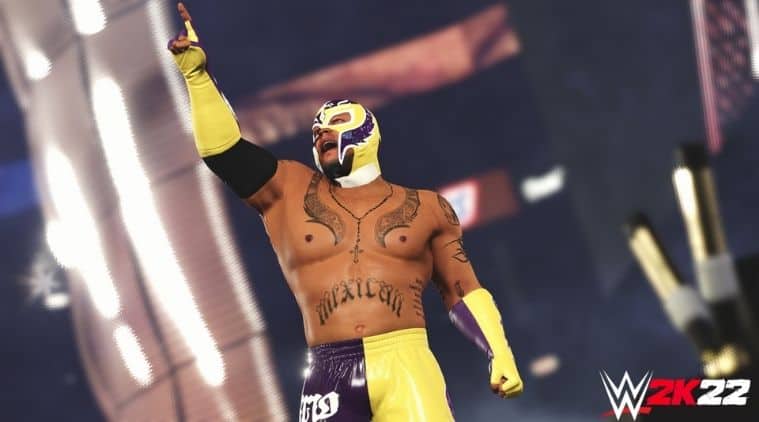 The fights would constantly switch between in-game and archived footage through a dissolve transition, adding to a level of immersion. (Screenshot)

The fights themselves are super engaging though, where it would seamlessly transition between game cutscenes and the original archived footage. But, having watched some of these matches as a kid, I felt some important parts got left out. In 2011, Rey won his first WWE Championship against The Miz, only to lose it later that night to Peacemak– I mean, John Cena. The defeat caused a polarising reaction from fans, and would have strengthened the Showcase mode by creating a message about humility. However, you only get to dance with Miz, while the entire incident involving Cena is left ignored.

Another notable instance would be his rivalry against CM Punk. And yes, I’m aware that the title was trying to go for a serious tone, but the goofiness in stakes would have made this year’s Showcase ten times more entertaining. It was a childish bet, where on one end, Mysterio had to get unmasked, while on the other, Punk had to go bald on stage. It’s a bit of a bummer, as these two matches could’ve easily topped the later, dull levels in the timeline that are focused on his return to the industry. But yeah, besides the flaws in terms of narration, I had a great time reliving those memories.

The promotional campaign for this game tried to oversell the idea of “revamped” controls. But in reality, it’s more of a button remap that adds a bunch of traditional fighting game mechanics to the mix. A lot of the special moves here rely on combo-building, where you hit a specific set of buttons in quick succession, akin to the Street Fighter titles. However, I found its execution to be quite inconsistent, and honestly, half of my successful attack combos were by accident. During key moments in combat, the camera switches to dynamic angles, offering a similar experience as watching on television. (Screenshot)

The same could be said for the general gameplay, where the basic moves and enemy targeting remains clunky. When trying to perform springboard attacks from the apron, my character would completely avoid the opponent and fall flat on his face. Signatures and finishing moves still need you to press more than one button, while your tag team partner continues to be the slowest one to break off a pin attempt. A cool addition, however, is the unlimited reversals, which are a bit harder to pull off with the minuscule time frame. But, it leads to some exciting back-and-forth between two players, in a tense contest of who has the faster reflexes.

I will give it credits for recognising my Playstation controller on PC, though. Normally, when you play PC games with a controller, Windows displays Xbox’s button scheme, which includes icons such as A, Y, and B. But here, the game adapts the icons automatically to whichever gamepad is connected, giving me the options – circle, square and triangle. So, plus points for that. The MyGM (general manager) mode returns after 13 years, letting you pick from a group of industry veterans, each with unique perks. (Screenshot)

One of the biggest features that made the PS2 era’s ‘Smackdown vs Raw 2008’ so iconic was the manager mode. After years of request, WWE finally brought it back with 2K22 under the title ‘MyGM’ mode. As the name implies, you can create your own manager, or pick from a choice of known industry professionals, each of whom has unique perks. For some reason, the build that I received didn’t let me create a custom character, and so, I went with the latter option. Playing as William Regal would let you sign a legend superstar for free, while picking Stephanie McMahon guaranteed double the payment. The greediness in me pointed towards Steph, further revealing a range of mechanic related issues. There is not much you can do here, besides cherry-picking a favourite champion and booking a few matches on Raw and Smackdown. (Screenshot)

The manager mode here lacks in depth when compared to other sports franchises such as FIFA or Madden. Instead of letting you run as a GM for an indeterminate amount of time, your tenure ends after 15, 25, or 50 weeks, depending on what you chose at the start. The roster-building is rushed as well, where you can cherry-pick your favourite champions right on the joining day. A better solution would have been to create a tournament, where the entire roster fights in a series of elimination matches to decide on a victor. Or, they could automatically pick a title-holder based on live real-time events. So, for now, it would be Brock Lesnar in the men’s division and Becky Lynch for women (RAW).

Furthermore, the game only lets you assign the main WWE men and women’s champion(s), while all the secondary titles get left in the dust. There is no Tag-Team, no Intercontinental, nor the United States belt either – which sucks, as it would have made for a great Pay-Per-View event. What’s the point of adding new mechanics if you’re only going to tap the surface? Being a franchise studio allows you to experiment with new features all the time, where failures can easily be swapped out in the next iteration. So, might as well go full force with your ideas when it counts.

Then there’s the new MyFaction mode, which I have mixed feelings about. Think of it as WWE’s version of Ultimate Team, where you’re supposed to build a roster of high-quality wrestlers and participate in matches. Starting with a pack of 10 cards, you finish challenges to earn in-game currency, and further expand your team with better card purchases. And of course, it wouldn’t be a 2K sports game without micro-transactions. So, if you feel like the entire progression system is slow and boring, the game lets you collect cards by dumping in real-world money. 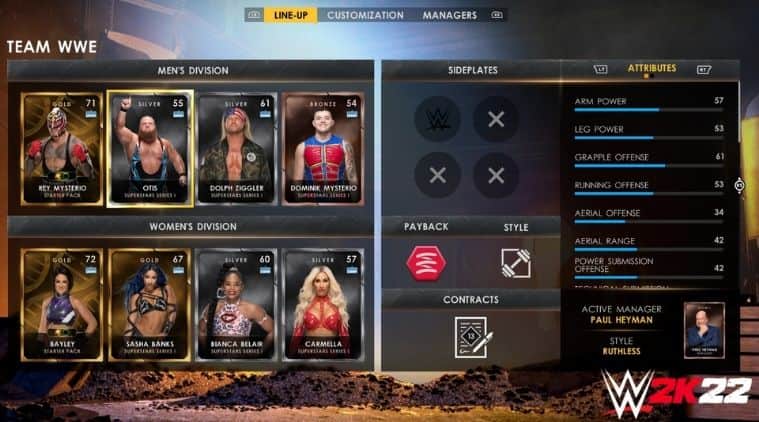 The new MyFaction mode is essentially WWE’s version of the Ultimate Team, albeit it functions on an “online single-player” scenario where you fight against AI (bots). (Screenshot)

I would highly recommend against this, as the entire game mode takes place in a bizarre “online single-player” scenario. What it means is that you never get to play against an active opponent, but rather, an AI (bot) version of their assembled faction. 2K claims that this would prevent a pay to win system, yet I don’t really see how.

Sure, you can unlock cards by simply investing time in the game, but a faster approach would be to buy them. So, those who can afford will continue to climb the ranks, while others keep grinding. Incorporating this into online multiplayer would have yielded better results, with a toxic playground that feels far more engaging and worth your time.

Professional wrestling is all about putting on a good show, and WWE 2K22 ups the ante with dynamic camera angles that mirror the electrifying impact, as seen on television. The lighting is a major improvement this time, resulting in some high-level graphic detail and a shimmer on sweaty surfaces. Main superstars’ faces, especially that of The Rock, John Cena, and Sheamus look hyper-realistic, though some improvements in the animation department would have been nice.

When opening their mouth, characters had a weird indentation on their cheeks, alongside some disoriented textures that mimicked indie horror games. I normally wouldn’t nitpick, but keep in mind that the studio took an extra year off to work on this title. WWE 2K22 sees a tremendous improvement in the graphics department, though some tweaks in the animation department would have been nice. (Screenshot)

The soundtrack here is the most basic lineup of licensed music you would find on a TikToker’s playlist. Unlike FIFA, it’s not trying to match a theme and feels like a soulless pack, containing the most popular songs over the past year; some of them being censored to make it marketable to kids. The sound mixing is horrible as well – most notably in the Showcase mode, where it was difficult to hear Mysterio’s narration over the blaring epic music.

The in-ring ambience retains the same uplifting energy as before, with varying commentary that adds to the mounting pressure. It is then brought to a screeching halt when the characters interact among themselves via robotic, lifeless line delivery.

In a faithful leap forward that evens out past blemishes, WWE 2K22 leaves a lot to be desired. The new game modes, which are a welcome addition to the franchise, are held back by lazy limitations, making for a short-lasting endeavour. The visuals, however improved and crisp, are presented through clumsy controls and an awful voice acting that feels cheap. The 2K Showcase starring Rey Mysterio continues to be the key highlight here, despite missing out on some fun storylines in the later stages.

Jacqueline Fernandez opens up about being in therapy: ‘People think therapy is useless, it helped me so much’

Mawi launches a patch to detect how brokenhearted you are – TechCrunch